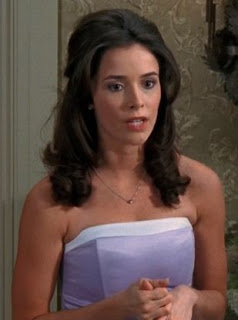 Warning: Spoilers follow for episodes 11 through 16 for season six of Gilmore Girls.

The thing I’ve noticed about the middle portions of Gilmore Girls seasons is that the Good Ship Gilmore takes on water, and disasters are obviously visible on the horizon, but at least when it comes to the main characters, they try to save the highest drama for the last six episodes.

I imagine it wasn’t such a big deal when it was a weekly show, but it’s much more noticeable when you’re on an endless binging marathon run of episodes, like I’m trying to do. It’s a slow drip, drip, drip of drama as the pressure builds on Luke and Lorelai, and Rory and Logan. There are essentially four “big” developments in this six episode span:

1) Lorelai finds out about Luke’s daughter, because April works a day at the diner. This understandably causes friction in their relationship, because, you know, Luke has a secret daughter, and he didn’t immediately tell Lorelai. The biggest issue with all Gilmore Girls fights is that they usually hinge on one character holding something from another, even if this is the 50th time that’s happened to in the show’s run.

2) Rory and Logan fight about stupid things, but it’s ultimately OK because he has money. Whether it’s using it to get the paper pushed out on time, or taking the “family” on a vacation to Martha’s Vineyard, Logan usually spends his way out of trouble. Things seem to be coming to a head with that though, as Huntberger Senior has a “what the fuck are you doing?” chat with him on the vineyard. (And by the way, Abigail Spencer pops up as a bridesmaid in E6-16!)

3) Zach and Lane make up, and then, quickly get engaged and married. Since I’ve watched ahead a bit, I’d like to point out that Lane’s story arcs are like Bizarro Gilmore Girls. She basically serves as a “what if?” in a way for Lorelai, if she had managed to patch things up with Emily way back when.

4) Paris loses control of the Yale newspaper in comical fashion. Like, ridiculous, over the top, stupid fashion, to the point where she has a bunker at the end. While I still find Paris really enjoyable, it’s kind of lame to see her still stuck in a rigidly anti-social box, even at Yale. It’s an Ivy League college, it’s weird that she can’t find some similarly ridiculously competitive people to bond with.

Anyway. Emily and Richard also reconcile with Rory and Lorelai in that patch, but it’s kind of Yada Yada / handwaved at the end of an episode where they all get drunk. My next entry will be on the final six episodes of the sixth season, so I’ll have a lot more to say then, as Gilmore Girls emerges from its middle episode doldrums. 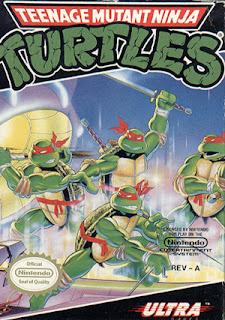 This week in Your Parents Basement, we are embracing the best aspects of turtle power! From 1989, we’re playing Teenage Mutant Ninja Turtles by Konami (Ultra) for the NES.

SHOW NOTES
- According to Price Charting, TMNT is pretty affordable by itself, just $7 for the loose cart. It’s $29 for the box and manual as well.

- Wikipedia has a good entry on the Konami vs. Ultra distinctions.

I’m a guy who can’t pass up a deal, even if that “deal” involves clearance aisle dessert items that are destined for the garbage compacter. JC’s Pie Bites were going for $0.50 a package at my local Stop and Shop, and unfortunately, they were appropriately priced.

I’d like to bring to your attention first the discrepancy between the package image and the actual pie bite. I expect some embellishment, but goodness, they look like completely different things! I was assuming I’d get one, nice big ball (heh), but instead, the balls come three to a sack (heh heh). Also, they are shriveled, and look like owl pellets or something worse.

As you can see, they’re dry. These are not juicy balls. The best comparison I can think of for the strawberry shortcake flavor is the famous Good Humor bars, and they kind of taste like a drier, worse version of those. The key lime pie bites are even worse.

I got these for 50 cents a pack, off the normal price of $1, but both are too much for these. They’re edible, but they aren’t items I’d ever spend money on again. They’re the sort of forgettable, sugary candy that works as a novelty, but not a consistent snack item. Spend your money on actual Good Humor bars instead of these pale imitations.

Want to support Steve’s blogging? Then purchase something via the Amazon clickthru link for Your Parents Basement, Steve’s other project! If you have a request for a future Steveats, leave it in the comments on here or on my Facebook. To check out some of the past Steveats, go here!