So, this is my attempt at a new semi-regular blog item – TV series that I have stopped watching. It is with a heavy heart that the initial selection is 2 Broke Girls, a once-promising sitcom airing on CBS. It recently finished up its third season, and it has already been renewed for a fourth season of cringe-worthy humor.

To be fair, the show has always featured plenty of gross-out humor and outright racism, and honestly, I have no friggin’ clue how it’s lasted this long in primetime. I mean, Entertainment Weekly found plenty of fodder just in the season three premiere, which was about the ‘soft opening’ of the cupcake shop.  Ha, you get it? It’s a joke. About vaginas. (Actual line of dialogue from that episode, provided in that EW post: “Come over here and eat something from the girls’ soft opening!”)

As I said, that joke isn’t really out of place given the history of the show, but in the past the friendship between the leads – Kat Dennings (Max Black) and Beth Behrs (Caroline Channing) – was able to elevate the filthy material. They still shine from time to time, usually as the snotty waitresses in the diner, but it’s tough for that charm to carry the show through its 72 episodes.

Likewise, the supporting cast is a mish-mash of reinforcing the crude humor and actually good performances. Matthew Moy, as the Asian owner of the diner, is good despite being the butt of jokes all the time. Garrett Morris plays the same character – cool old black dude – that he plays in everything now, which is fine. But Jonathan Kite as the ambiguously Russian-ish cook and Jennifer Coolidge as his sex-crazed sometimes beau are just unfunny.

However, part of the reason I’m tapping out is the introduction of Eric Andre as Deke, the secret millionaire love interest of Max. While I’ve enjoyed some of the clips I’ve seen of his on YouTube and his appearances on late night shows, this is now the second sitcom he’s helped to torpedo. He was by far my least favorite aspect of Don’t Trust The B, as in my review of that show I was only able to describe him as “the wet blanket Mark.”

The final straw for me was episode #69, which seems appropriate enough, given my other criticisms. The episode features a guest appearance by Lindsay Lohan, who plays a bridezilla. I’m not sure if they could have done a more cliché casting unless they somehow were able to show her snorting cocaine or slapping a publicist. When you hire Lindsay Lohan to do a guest spot, and all you can manage to have her do is act like a bitch, well, that signifies to me that you’re just out of ideas. Lohan somehow managed to show more chops in a 3:49 segment on Billy On The Street where all she does is destroy a car.

Inexplicable TV Review: Hotel Impossible Is An Incredible Show You Should Be Watching

If you’re a fan of the ole renovation, remodeling and reshaping “skill” reality TV shows, then you need to be watching Hotel Impossible. You need to be watching it because I am a connoisseur of all of these shows, and let me tell you, it’s the best one by far, which is weird and inexplicable because it gets no publicity, and I think it airs about once a month at 2 a.m. on the Travel Channel or something. (Reality check: It’s actually Mondays at 10 p.m., but yes, Travel Channel.)

For some reason, you might decide that you do not want to take my word about this show’s wonderful quality. In that case, I have several retorts. Firstly, you can check out clips here. For something I recommend, here’s him checking out a 1970s style room in the Catskills.

What should be immediately apparent from the clip is that the show has a slightly relaxed tone as compared to the hyperbolic mania of Robert Irvine, Gordon Ramsay and John Taffer’s offerings (Kitchen Impossible, Kitchen Nightmares and Bar Rescue, respectively). With most of these “improvement” shows, they start out focusing on the renovation aspects before giving into episodes about DRAMA as time goes on. You could call this Real World syndrome, as the novelty of “strangers living together!” erodes into “strangers forced to work together!” and finally “strangers forced to drink, fuck and fight together!”

Hotel Impossible is still in that sweet spot of mostly just focusing on the host, Anthony Melchiorri, fixin’ up horrible hotels. It could be the fact that seasons only seem to run about 10 episodes, but that hasn’t gotten formulaic yet for me through three seasons. Yes, they have the contrived aspect of “Will the designer finish the renovation?” every episode, but the problems at the hotels are varied enough from episode to episode to keep me interested.

Examples of these problems? Alcoholic owners, people trying to turn over 200 rooms with no previous hotel experience, cheapskate owners who can only identify short-term money savings, improper housekeeping standards, horrible attached restaurants, and in the most recent new episode, the afore-seen Catskills resort that was staying open in the winter despite no customers, because it was a million miles away from a proper ski range.

To me, there is always a balance that producers of these shows need to strike between accurately portraying the issues a business faces, and actually having enough footage to make for a viable episode. I’ve always been far more into the slower, less dramatic shows, like the UK version of Kitchen Nightmares and, currently, Hotel Impossible. The other shows on the air now have veered too much into obviously staged drama, or they don’t focus enough on the nuts and bolts of the changes. Bar Rescue used to be a lot better at showing you why Taffer was doing something, whereas now, it’s normally like 40 minutes of him yelling at someone.

There is also one prurient reason that the show is appealing to male viewers – All of the designers are attractive ladies. And by this, I mean Casey Noble and Blanche Garica. They are sassy, and all sorts of all-right. (Ladies, they do also usually have some sort of hunky construction guy at various sites, but no, there isn’t anybody on the Robert Irvine gunshow level.)

The picture of Noble comes from this thread on an IGN board. Garcia’s photo from comes this blog, which republished or scanned a newspaper article about one of the renovations.

Small follow-up from browsing about on YouTube – It looks like there is a UK show called The Hotel Inspector that might have served as an “inspiration” for this one. So, looks like I have some more cheesy reality shows to watch!
Posted by Steve G. at 5/16/2014 07:00:00 PM 2 comments: 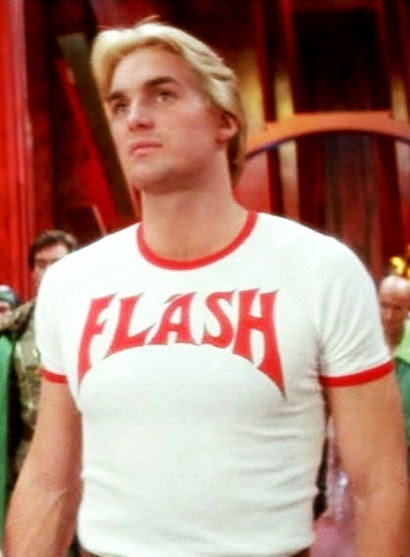 Housekeeping portion: If you left a comment ages ago, and you just got an e-mail notification about its approval now, well… Sorry about that. And also, I’ll be doing some entries here and there, since I feel like using this as a creative outlet again. “Reactivating your Twitter and Blogger in the same week? Madness!” Absolutely!

So, for a podcast I was on this past weekend, I watched Flash Gordon (1980) for the first time. Spoiler alert – I friggin’ loved it. It was an incredibly enjoyable two hour experience, and there were two factors contributing to said enjoyment level: the incredibly light tone and the stellar soundtrack.

Tackling the first factor first, to put things eloquently… At no point are the actors in Flash Gordon completely up their own ass, like in, say, a Christopher Nolan Batman film. While I liked Nolan’s movies, the unfortunate side effect of them has been a slew of superhero movies where no fun is allowed, with the exception of Joss Whedon’s Avengers.

And even the success of that movie has seemingly given movie executives the impression that “success” is contingent on pairing a bunch of superheroes together, as opposed to making a fun popcorn movie. Maybe Guardians of the Galaxy will buck this trend, since it’s essentially using the leftover heroes, but crap like the new Spiderman and Superman movies have been grab bags of villains and heroes talking dourly to one another. The new hero movies take all of the joy and fun out of being a hero.

Therefore, it’s awesome to see Flash Gordon acting like he’s the shit in the opening five minutes of Flash Gordon, and he’s not even a superhero. He must be aware that the movie is named after him. Throughout the movie’s 120 minutes, Sam J. Jones, Max von Sydow, Timothy Dalton and Brian Blessed just chew up the scenery and spit it out, and it’s awesome. Have I mentioned that it’s awesome enough? Well, it’s awesome.

All of the effects in the movie are cheesy, especially since this came out post-Star Wars. This only adds to the movie’s appeal in my mind – This is a movie that could only have been made in the 1980s, between the effects and a color palette that ranges from neon to radioactive in most scenes.

And, oh – Queen. As I wrote down in my notes while watching this movie, “Any of the scenes with Queen’s music are awesome. God damn it, why did Freddy Mercury have to die? The music helps to distract from some of the now really bad special effects. Yet another thing that should be used in modern movies.”

FOX is allegedly doing a re-make of Flash Gordon as of April 2014, which has me worried. I will set the bar low, as I’m imagining some grisly dark tale with tons of pretty but heartless CG and a soundtrack by The Black Eyed Peas, or Gwen Stefani.

I didn’t really have a proper ending for this, so here – just listen to Queen.