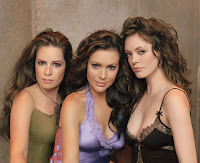 Short on talent, large on... something else.
The bad thing about the WB / UPN / CW / future Sucky Network is that their continual lack of programming means shows that are just OK survive for years, to the point where their crappy producers can then package up 100 episodes and spread their stink to TNT.

Please TNT, give me anything besides Charmed, which is like a second-rate cheesy magic show. Just splurge and buy Buffy (another show I'm not crazy about but clearly better than Charmed) or show more Law and Order. Yes, I realize they already show Law and Order two to four times a day, but they do have about 400 to chose from (about 22 per year for 18 years).

My two main critiques of Charmed would be 1) it arbitrarily makes up characters and rules and powers for its characters, even more so than normal for a show of its nature and 2) the characters have the personality of this chair I'm sitting on. Shannon Doherty was the lone interesting one, and she probably knifed someone backstage, explaining why she left. I would too if my co-stars' main "acting" abilities were the knee-jerk whine (Holly Marie Combs), and being short and hot (Alyssa Milano).
Posted by Steve G. at 4/28/2009 09:59:00 PM No comments:

- Almost no one has seen the "second" Anchorman movie, Wake Up Ron Burgundy, which is cobbled together from unused footage to create an entirely new movie. It really is fantastic, and certain parts of it, like the bank robbery scene, are as good as the best scenes in the original movie. Click here to see another great scene, when Champ confesses his true feelings for Ron.

The whole movie is split into various parts on YouTube, and also available on pretty much every major pirate movie tracker. I would encourage you to buy it instead, but Will Ferrell doesn't need any more money, and I have no idea what DVD it is actually on.

- Keeping up with my trend of kind-of writing about music, lately I've been into Pavement. Yeah, this isn't 1993, so what? "Cut Your Hair" is in heavy rotation. Maybe because I need to shave. My facial hair is getting very itchy.

Other songs near the top of my iTunes playlist, meaning I've added them recently: "Yoshimi Battles the Pink Robots" by the Flaming Lips. "It's Hella Good Without Me" by Eminem vs. No Doubt. "How Far We've Come" by Matchbox Twenty. "Use Your Love" by Katy Perry. "Don't Want To Hurt You" by the Sounds. "All These Things I've Done" by the Killers. "Life on Mars" and "Sound and Vision" by David Bowie.

I have ridiculously bad taste at times.

- I sent out two job applications today. Scanning copies of my old newspaper clippings was a much harder chore than I imagined, and it makes me want to quit newspaperin' for the simple pleasure of never having to do it again. My hands still smell like shitty newsprint, even though I've washed them like three times.

- "Girls Are Fucking Evil" by the Ataris just popped up on my iTunes. I didn't even know I had *this* emo of a song on there, I swear. Luckily, I skipped ahead to the next song, and it's "I Wish" by Skeelo. Now there is a song a white guy can properly appreciate. 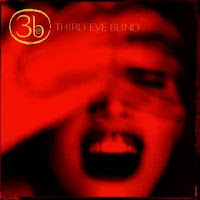 At a certain point, it became very cool to hate things that are popular. I have no idea when this started - I imagine that at some point, people were shitting all over Socrates, clowning him with remarks like, "My life is better unexamined and mysterious, gawd, loser." But in contemporary fashion, it seems to come up most often when discussing musical taste.

Specifically, I was at a party this weekend where some dude was all like, "Third Eye Blind sucks!" I took great offense, because I like Third Eye Blind, and also, it seems like a kind of random band to attribute sucking to. Are they Zeppelin? No, but they make pretty reasonable, popular music, which was this dude's main arguing point - that they're fine if you like popular music. At which point I rightly guessed that he liked Rancid, the Ramones and some other fringe punk band that's very popular with people who don't like popular music, but that for the life of me I can't remember right now. (I was drinking at the time, which helps certain parts of my memory.)

I can trace my firsthand experience with this type of "Popularity sucks!" attitude back to high school, when various factions of friends and acquaintances and not-friends would like and dislike a variety of music for reasons that had little to do with music. The list of the most maligned bands that I can remember probably isn't that surprising - Britney Spears, Eminem, N'Sync.

I also recall joining in without hesitation, but as a result, it meant I covered up my own embarassing musical tastes. For example, it was fine to like Ace of Base because it was ironically cool, but it wasn't cool to admit liking Billy Joel or Alanis Morrisette. The first CD I ever owned was Dookie by Green Day, which is certainly cool and acceptable, but the second was Jagged Little Pill, which isn't, and before Green Day I listened primarily to my relatives' copies of Billy Joel's greatest hits, the Counting Crows and the B-52s.

As I've grown up and matured (I think!), I've come to like my "uncool" musical roots. And, to detest music snobs. It's something I share with Chuck Klosterman, who angrily dismisses people who hate metal in Fargo Rock City. Billy Joel and Alanis are my metal, and as a result, I tend to be more willing to back bands without a lot of critical acclaim than others, I've noticed.