Warning: Spoilers follow for the current and past seasons of Bones. Like for real, don’t read this if you’re honestly concerned about the fate of certain characters.

Hey guys, remember when Bones was a plucky, forensics-based weekly procedural that mostly served as a convenient excuse to see attractive people like Emily Deschanel, David Boreanaz, Michaela Conlin and Carla Gallo, make cute and flirt with one another?

Well, surprise! Much like the death spiral of Psych, Bones seems content to smash all of the characters you love to bits while its burns off its final episodes, much like a toddler destroying its toys in a fit of rage. I thought the previous seasons’ focus on ridiculously implausible computer hacker Pelant was veering too much into Very Special Episode territory, but someone in charge of the show apparently decided that was the way to go for the final two seasons as well.

Bones has already been renewed for a final season, which will probably be 13, 18 or 23 episodes of misery. But in this season and the previous season, we’ve seen Sweets killed after we learned he got his lady pregnant, Bones and Booth almost breaking up because of his gambling addiction, Hodgins becomes paralyzed, and then, he starts emotionally abusing Angela. Ye gads.

On a better show, this subject material could be handled well. However, Bones has always been more about breezy fun, or at least, it used to be. I’m tuning into Bones because I want to see them solve some murder mysteries while Temperance “Bones” Brennan hilariously misinterprets everyday social actions. I’m not watching because I want to see the characters’ lives destroyed.

This seems to be a common problem for shows as they age – I wrote earlier this year about how Suits has turned into a serious-but-lighthearted legal show into an over-the-top weekly melodrama. The worst example though is the show I mentioned in the opening paragraph, Psych, which got really heavy-handed as it neared the finish line. The last season of that show is just all sorts of ugh and meh. 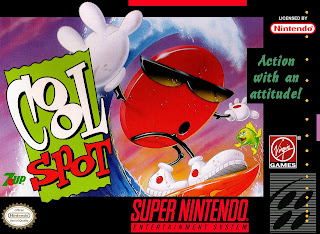 This week in Your Parents Basement, we are just reading emails as we cope with the loss of Todd Brisket still! All of these asks are from 2016, as the sweet baby boys of Huell and Steve only answer the freshest, hottest asks.

Want to have an email or comment read on the air? Send us a message on the ole Twitter or Facebook, or, shoot that mail to parentsbasementpodcast@gmail.com. As you can hear from this show, we answer all asks, regardless of how mysterious they are. <3 p="" scootingbutt="">
Posted by Steve G. at 5/30/2016 09:00:00 AM No comments:

Email ThisBlogThis!Share to TwitterShare to FacebookShare to Pinterest
Labels: podcasts, Your Parents Basement 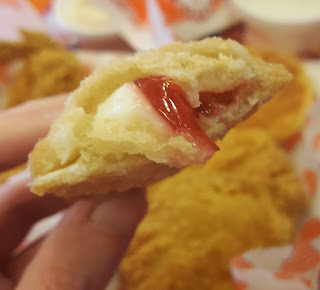 So, Popeye’s has a dessert item. I’m calling it a “dessert item” because they didn’t really have a name for it on the menu. It was a sort of pie, similar to the apple “pies” that are served at McDonald’s – a sort of fried, two or three-bite item. Except instead of apple pie, Popeye’s pie item has cheesecake and strawberry filling.

The verdict… Surprisingly good! It was sweet, but not overpowering, and I’d definitely have it again. The pie casing was pretty iffy, but still, that filling made it a perfectly above-average fast food item. Thumbs up to the Popeye’s dessert team!

However, when it comes to Popeye’s other items, holy hell are they really giving you a metric ton of chicken nowadays. Their traditional combo meals are called platters, and come with two or three pieces of chicken, a side and a drink for about $10 or $11. Orrrrr, you can pay $11.50 for a special meal deal they have, and they give you five pieces of chicken, two sides, a dessert item and a 44-ounce soft drink! 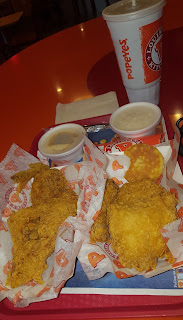 That is a ton of food – see the photo. And of course, I plowed through it. While it’s advertised as five pieces of chicken, it’s more like three, three and a half. There is almost no meat on the bone-in thighs and wings, but the breast and drumstick were tasty, if you’re into fried chicken. And who the heck doesn’t like fried chicken? Even fast food fried chicken is still delicious, says the guy who can always be talked into KFC. I generally prefer Popeye’s to KFC, because it tastes a tiny bit less greasy and the actual chicken is better, but I’m game for both at all times.

One definite edge KFC has though – mashed potatoes. Popeye’s gave me this weird, soupy mixture with gravy and bacon bits in it. Is the bacon craze over yet? It was cute when it first started, but now a bunch of companies are using bacon that have absolutely no business involving bacon in their food transactions. You do you Popeye’s, and just stick to the fried chicken, and those weird, spicy French fries on your menu too.