Inexplicable Podcast Review: Crimetown goes to the zoo in EP3


From now on, I’m going to be discussing the contents of Crimetown episodes, and specifically, spoiling the episodes. So, if you still aren’t following along, I’d recommend catching up on the past episodes. They’re usually in 30 minute chunks, and I highly recommend them!

Episode 3 starts out with a funny-but-sad story about how incompetent some of the workers at the Providence zoo were. Namely, the guy who kept feeding the tortoise even though it had been dead for three days. That was good times, or at least, as good of times as a story about a dead turtle can be. But, it was a good, immediate example of how cronyism worked in Providence before Buddy Cianci’s election.

Of course, as the episode details how he got elected to the mayor’s office, we quickly realize that graft of one kind is just going to be exchanged for graft of another kind. One of the mobsters, Jerry Tillinghast, flat out says that he arranged for a couple thousand Cianci votes. Since the final margin of victory was 709, it pretty much means the Mob delivered the election to him. The podcast has audio from Cianci, and while he doesn’t admit that the votes were delivered to him, he doesn’t deny it either.

The episode doesn’t really get into who Cianci beat in the election, not even mentioning his name, which Wikipedia tells me was Joseph A. Doorley Jr. Interestingly, his entry has this nugget: “The [Civic] Center became a focus of a corruption investigation in 1973. The director of the Center was convicted of soliciting a $1,000 bribe from a concert promoter. The lead investigator for this case was assistant attorney general Vincent Cianci, who used the case as a platform to run for mayor against Doorley on an anti-corruption platform.”

Mike Stanton, a Journal reporter who provided a lot of the reporting backbone for the podcast, also has the interesting piece on Cianci vs. Doorley. The podcast’s usage of audio – both recordings from Cianci, and fresh interviews with Tillinghast and others – is stellar though, and helps the vibrancy of the show.

So, Cianci wins the election by 709 votes, and surprise! The cronyism of the Democratic machine is replaced by the cronyism of the Mob. At least in the early days, they have interviews from Cianci supporters and Tillinghast supporting the idea that Cianci was legitimately working as hard as he could on behalf of the city. But, that’s contrasted with the ethical compromises he had to make – the no-work job for Tillinghast – and his own audio clips admitting that he had an enormous ego.

The fourth episode is seemingly ready to be dropped on Sunday, like the first three were. My enthusiasm is still high, so hopefully y’all are still giving this show a close listen.

I’ve written about podcasts here and there, and this entry from 2014, after Serial finished, is still mostly valid. And hey, I host a podcast! If you like pre-2000s video games, check out Your Parents Basement. 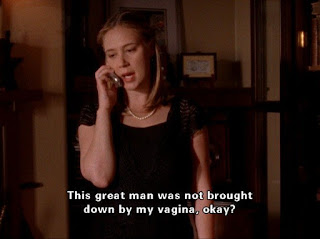 Warning: Spoilers follow for episodes 1 through 15 for season five of Gilmore Girls, although I’m taking a more circuitous route today than in previous entries. Also, this picture of Paris doesn’t really have anything to do with this entry, but it’s probably her greatest line ever.

Today, I’m going to focus on the worst aspects of Gilmore Girls, which would be the despotic and farcical happenings in the main settings of the show’s fifth season – Stars Hollow and Yale. Anytime that the government or social structure or institutions of either are at the forefront, I’m cringing or rolling my eyes at each unbelievably stupid thing happening.

First, Stars Hollow. I’ve mentioned my dislike of Taylor in several past entries, but the ante is upped in the first part of season five and the last part of season four. He arbitrarily denies permits that the Firefly Inn needs in order to benefit his own business, he screws around with Jackson’s greenhouse because it’s six inches over the property line, he runs meetings like an idiot, and basically just acts like a dictator.

We’re supposed to believe that Stars Hollow is this quaint, folksy place to live, yet Taylor is the show’s embodiment of government and pretty much the fucking worst. It’s just a pet peeve of mine as someone who was forced to sit through dozens of planning and zoning board meetings. That process is boring, but typically fair. TV shows often sidestep and simplify the boring, even if it creates a distorted, stupid version of the truth. [Insert politically time sensitive comment here.]

The breaking point for me was when Lorelai and Luke’s relationship became fodder at a Town Council meeting, or whatever they call them. It was just the most insane, unbelievable shit ever. And yeah, it’s meant to be funny, but I just kept cringing. Gilmore Girls is at its absolute worst during these moments because there is so much more fertile ground they could be tilling! More with Lane and her replacement, more with Paris trying to date, and hey, what’s Marty up to?

So, let me segue to Yale, and all of the annoying fucks there. Logan is seemingly the romantic option for Rory this season, and surprise! He’s awful. He’s just the worst. He has marginally gotten better as the season goes along, as he lets Rory tag along for a story on the Life and Death Brigade, and sort of improves in behavior.

However, his initial debut in the season works as a Moral Event Horizon for me. In his first scene, he belittles Marty and treats him like crap, and in his second scene, he has an aggressive conversation with Rory trying to justify his behavior. He is portrayed as a playboy, but mostly acts like a goon. Like pretty much all of the loser guys Rory dates, he has a weird sort of aggression about him, but hey, I guess the show has established that Rory is only into emotionally unavailable dudes.

Not that this is unusual – people are horrible to one another in their 20s – but I’ve never found any of her boyfriends appealing. Karen forced me to pick one last night, and I begrudgingly went with Jess as of the wedding episode of season five, mostly by default. I don’t know if his self-help stuff stuck at all, but it might have, so that would make him better than Dean (anger and motivation issues) and Logan (just the worst all-around).

The other “ick” Yale aspect is the newspaper, and its editor. Gilmore Girls has two types of characters – nuanced, interesting ones that experience ups and downs (the leads, Lane, Emily, Richard) and completely ridiculous and unbelievable caricatures (Miss Patty, Babette, Taylor). Doyle McMaster is firmly in the second camp. It’s like he studied All The President’s Men, but also, 1950s Superman and Spiderman comics, and that’s how he thinks newspapers are run. Fun times!

Anyway, this entry is mostly focused on the bad. Later this week, I’ll mix in what I like about season five, although it’s much more up-and-down to me than the past ones. 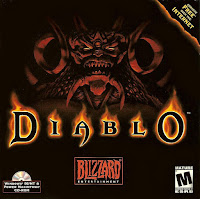 This week in Your Parents Basement, we are clickety clacking our way past the most disgusting evils of the 1990s! From 1996, we’re playing Diablo by Blizzard for the PC.

SHOW NOTES
- Diablo is pretty affordable nowadays, as it’s usually bundled with the second installment and their expansion packs in $15 to $30 physical media packages. However, it can be a bit tough to find, since Blizzard doesn’t support it. Diablo 2 is $9.99 for a digital download from the Blizzard website, with the expansion pack another $9.99.