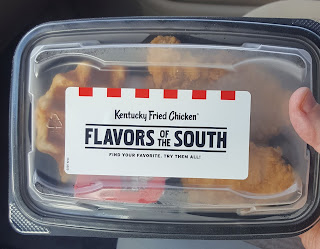 Hey guys, how have you beeeeeen? Good, I hope? Annnnyyywwaayyyy. I've been squirreling away these meals over the past couple of months, but a combination of some writer's block and lack of time has been loosened by another journalism industry-related downturn in employment status. (That's a nice way of saying that I got laid off again, as I often have done to me.)

So, let me instead focus on more pleasant things, or at least, more mediocre things. That being, the KFC chicken and waffles. I actually tried these out for the first time when they were introduced in November, but they've resurfaced in advertisements tied around MARCH MADNESS 2019 and its amateur athletics basketball tournaments.

If I pitched to you, “Chicken and waffles from KFC,” the product and taste that inspires in your mind is probably exactly the same as the experience I had. By that, I mean it is exactly average KFC-like food. I might be mistaken, but I think they even use the same exact boneless chicken as they use for their tenders.

And the waffles... Well, they're kind of bland and flavorless. They come with a little individual package of syrup, and you'll need to douse those waffles in it, or pair it with a bite of chicken each time, because they are disappointing. My were pretty gummy, and tasted like a product that had been microwaved, but oddly, they weren't as good as an Eggo.

Since they've returned, they are now a “proper” part of the KFC value menu, meaning they're in the $5 to $10 range, depending on how many you'd like and the sides you want included. Also, by the way – the basic chicken-and-waffle “sandwich,” with syrup, runs about 1,100 calories, according to their nutrition calculator. It definitely rates toward the bottom of my desired fast food items when you factor that in as well.

(Scheduling note going forward: I have a couple more of these in the queue, in terms of things I took pictures for or bought with the idea of doing a Steveats. Karen and I are kind of busy this month and next though, so I'm not entirely sure when they will end up on the site. As usual, I'll push them out on my Facebook and other channels when I remember.)

Want to support Steve’s blogging? Then purchase something via the Amazon clickthru link for Your Parents Basement, Steve’s other project! Or, you know, check the show out! If you have a request for a future Steveats, leave it in the comments on here or on my Facebook. To check out some of the past Steveats, go here!
Posted by Steve G. at 4/12/2019 05:00:00 PM No comments: