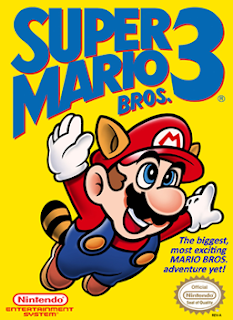 - From Ryan Divish and Geoff Baker of The Seattle Times, Nintendo is selling its majority stake in the Seattle Mariners. The valuation is $1.4 billion, and a follow-up story on how the deal was struck is here. The initial purchase price? Around $100 million, according to a January 1992 New York Times article by Lawrence Malkin.

- Kotaku has an excerpt from Alyse Knorr’s book on the making of Super Mario Bros. 3, and it’s an awesome read! Check it out here.

- Pretty much every site on the ole Internet had a piece about the new NES adapter that lets you use some modern controllers.

- Nintendo has a Humble Bundle available until May. Highlights include Retro City Rampage and Citizens of Earth.

ON THIS DAY IN VIDEO GAME HISTORY…
- Historically, nothing prominent has come out on April 28, so… On April 29, 1998, Tekken 3 came out for the PlayStation. Released by Namco, it’s considered one of the absolute best games for the system, and one of the best fighting games of all-time.

- A little game called Grand Theft Auto IV came out on April 29, 2008. It made a bazillion dollars for Rockstar.

- Similarly: Mario Kart Wii came out in 2008 as well. It was a pretty good day for games.

Video game history information comes from GameFAQs and Moby Games. And as always, if you’d like to support the show, do so via our Amazon link.


Warning: Spoilers follow for seasons one and two of Unbreakable Kimmy Schmidt.

Another week, another Netflix binge session thanks to Unbreakable Kimmy Schmidt, although this will probably be the last one until the fall, when more Marvel TV comes out. Let me give Netflix enthusiastic “kudos!” though for airing UKS, which is now probably my favorite half-hour sitcom airing.

In season two, UKS isn’t really doing anything all that new. It’s more of Kimmy adjusting to “modern” life after being trapped in a bunker for a decade or so. However, the second season does a better job of making Titus seem like an actual human being, plus, focusing more on the good side characters (Carol Kane, absolutely going beast mode this season) and less on the bad (thank god there was farrrr less of Dong). Also, Jane Krakowski is still incredible.

The second season also absolutely nails one aspect – guest stars, whether in for one-shots or recurring. The best recurring character, obviously, is Tina Fey as a Jekyll-and-Hyde therapist, depending on her intoxication level. She’s in about half the episodes, and will hopefully be back in future seasons, thanks to her being one of the show’s creators. Joshua Jackson is also good in a one-shot appearance as a store clerk.

However, the greatest impact comes from a character who’s only in the final episode. Because it’s a super spoiler, let me cover it up with a different font color. Highlight to read: Lisa Kudrow just flat out kills it as Kimmy Schmidt’s mom. She’s been awesome on a slew of late night talk show appearances ever since Friends finished, but I wasn’t ever that interested in things like The Comeback. So, it was awesome to see her in this role, and it was pretty much perfect casting.

Anyway! Season three can’t come soon enough. I’m hoping they shift completely away from any Dong storylines, and just find a somewhat decent guy for Kimmy. (Or hey, failing that, it could just be a fun sitcom without any focus on dating!) If you’re tired of all of the heavy, drama-filled stuff on Netflix, definitely binge your way through UKS. 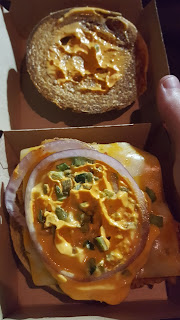 In contrast to the previously tried Angriest Whopper, Wendy’s jalapeno fresco chicken sandwich actually does have some spice and kick to it! I mean, not nearly as much as the commercial and ingredients list would suggest, but still. If you like spicy, it’s slightly spicy. It made my brow sweat. 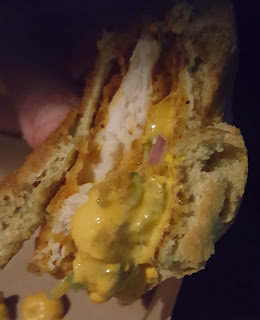 However, again, it was a disappointing eat. As you can see from the photos, its main characteristic is a soggy sort of ghost pepper sauce. This is mildly hot, but it makes everything in the sandwich taste kind of mushy. Also, while the sandwich claims to have diced / chopped jalapeno on it, they honestly tasted and looked more like scallions to me. Bad scallions, at that, since I’m a guy who likes his scallions poppin’ and fresh.

Worse, much like the previous Steveats items, the jalapeno fresco chicken sandwich is not especially cheap or nutritious. The recommended (retail) price is $4.99, and I think mine was $5.25 or $5.50, probably because I got it from the Middletown (close to Newport) Wendy’s “all the way” out on Aquidneck Island. The default sandwich checks in at 590 calories, and it’s definitely not a guilty pleasure item that deserves that amount.

When I’m evaluating fast food options, I must admit that I always compare them to the old standbys – the McDouble and McChicken from McDonald’s, and the double cheeseburger from Burger King. Both are in the $1 to $1.50 range, so, it’s a simple equation – Would I rather have had this weird jalapeno chicken sandwich, or three McDoubles / double cheese burgers? It’s a definite “no” for this sandwich, although it’s better than the Angriest Whopper in a direct matchup.