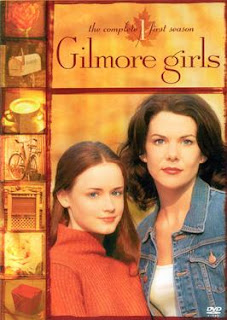 Karen and I are making our way through Gilmore Girls right now, since the show is being revived in November for Netflix. While I thought I had seen a decent amount of it back in the day, between watching it with various female friends and girlfriends, I clearly didn’t watch them sequentially, judging from my experience with it now. Some random thoughts through about nine episodes:

- The show’s title works on THREE levels, you know, since it’s not just about Lorelai and Rory. Emily, Lorelai’s mother, is the closest thing to a third lead. I had considered her and Lorelai’s dad to be more comic relief and evidence of culture shock from previous viewings, but man, things get VERY emotionally raw right from the start of the series.

This is when the show is at its best to me. Lorelai and Rory have tons of humor in their interactions, but especially for the former, that humor is used as a sword to protect herself from the venomous barbs of Emily. I just finished the episode where Rory falls asleep at the studio with her boyfriend by accident, after the dance, and Shit Gets Real between Emily and Lorelai, and Lorelai and Rory, in a hurry.

- It’s weird to watch the show and to see Melissa McCarthy pop-up, and then think to myself, “Yup, of everyone in this show, she’s going to be the one that makes $1.1 billion at the box office!”  However, she and Lauren Graham are definitely the most vivacious performers in the cast, and it’s not surprising to me that they’ve had the best post-Gilmore Girls career by miles.

Grandma and Grandpa Gilmore are probably the next best in my rankings. They’re both very good in their roles. Unfortunately, the “kids” in the cast mostly pale in comparison. It’s to be expected, but Alexis Bledel in particular seems a bit wooden in some scenes. Half the time, she can hang with Graham, and half the time, she seems to be struggling as much as the audience to keep up.

- The early episodes of Gilmore Girls suffer from a bit of a tone and quality split. There is the awesome relationship-focused show, which focuses on the dynamics of three generations of the Gilmore girls. Then, there is the shitty farcical stuff going on in Stars Hollow, which is all so ridiculous that it detracts from my enjoyment of the show.

Stuff like the nutty neighbor having a cat funeral while her boytoy plays the piano for her at night, and the super nosy dance teacher, and the incompetent produce salesman, and the historical reenactors, and the ultra-quaint Pepperidge Farm style life in the town… Just ugh. It all feels like Executive Meddling crap that was focus grouped in. I’m hoping there is less emphasis on that going forward.

- Holy smokes, Paris. She has two prominent friends in these episodes, and I’m not talking about Madeline and Louise. It made me feel awkward at first, because she’s supposed to be playing a high school Alpha Bitch. However, Wikipedia tells me that she’s 39 now, which makes her 23 during the show. And, uh, it definitely shows. She’s the Lacey Chabert of this production. (p.s. Lauren Graham is a stone cold fox in season one as well.)

- Pretty much all of the male suitors of Rory and Lorelai don’t do much for me. Dean seems like the “generic tough guy but secretly nice” sort. After all, he’s dating Rory Gilmore. And Lorelai is currently dating Rory’s teacher, who’s kind of weasely and disgusting to me. He asked her out based on two awkward exchanges during parent’s night, and Lorelai getting in his face about Rory missing a test! I just don’t find the sudden escalation of their feelings all that believable.

From future episodes, I know that Luke has a thing for Lorelai, and they do plant the seed for that even in the first string of first season episodes. However, his character is so comically gruff that I don’t really care about him either yet. I imagine that’ll change, but as I mentioned earlier, there are so many other balls in the air when it comes to (horrible) side characters in Stars Hollow.  It’ll take some time for them to thin the herd and focus attention on Luke.

Anyway! I’ve enjoyed my re-watching of Gilmore Girls more than I expected, but gosh, there’s still so much more to go. Wikipedia says 153 episodes! I will keep y’all updated with these very timely reviews as we go along.

As part of my continuing culinary adventures at gas stations, and at the urging of Eric Rueb, I decided to give one certain food item at three different places a try – pizza. The results were… not really that surprising overall, but individually, somewhat surprising!

First discussed and worst I had – 7-Eleven. This actually looked like the best of the three pizzas available to me, as the cheese looked to be seasoned and the pizza hot. Important note here – it’s an incredible curve that we’re judging these pizzas on, as a good portion of frozen, store-bought pizzas are better than these ones.

However, while the 7-Eleven pizza looked OK, it was incredibly bland and greasy. That’s a double dip of bad pizza qualities, since if I’m ingesting a bunch of calories and oily cholesterol, it better taste good. The pepperoni was slightly better than the cheese, but both left this reviewer cold. 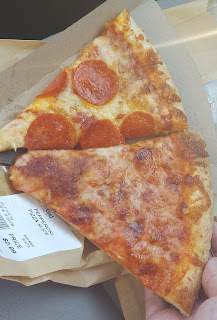 In second place is Cumberland Farms. This was only narrowly behind 7-Eleven in terms of look, and it definitely tastes better. It’s kind of like good cardboard with cheese. You know, the type that would be acceptable to send something precious in, as compared to the cheap cardboard used for fast food, or to house gas station pizza.

I think the deciding factor in Cumberland Farms over 7-Eleven is the heat lamp. Cumby’s seems to keep their lamp on a higher temperature, or *gasp* they might actually ditch the pizza more frequently. This leads to fresher tasting cheesy cardboard. 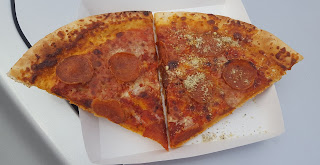 The surprising taste winner is Speedway, because their pizza looks like it was microwaved about a million times before being put out there on a heat rack under some lamps. This wasn’t a fluke, either – I went at two different times, and three different Speedways, and each time, the pizza looked like a warmed-over substance strip mined from the surface of Mars.

However, it definitely tasted the best of the three gas station pizzas I tried. I have no clue why either. My guess would be that because it’s a bit thinner, it retains its (probably fake) cheese taste and sauce a bit better than the other two. Also, the Speedway ’za is definitely helped by the fact that they helpfully offer up a bunch of seasonings. I went for the shaker of Garlic Parmesan, and covered the slice, and that definitely helped.

All three pizzas were edible, and since the going rate was two slices for $3 at all three places, I can’t really complain about the price too much. However, if you’re looking for an actual meal vs. a quick bite, then your Generic Chain Pizza Place is better for $5, whether you favor Domino’s, Pizza Hut or Papa Gino’s.

Want to support Steve’s blogging? Then purchase something via the Amazon clickthru link for Your Parents Basement, Steve’s other project! If you have a request for a future Steveats, leave it in the comments on here or on my Facebook. To check out some of the past Steveats, go here! 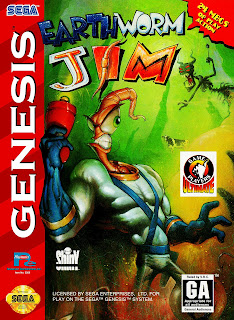 This week in Your Parents Basement, we are whipping our way past rabid dogs to save Princess Whatsername! From 1994, we’re playing Earthworm Jim by Shiny for the Super Nintendo and Sega Genesis.

SHOW NOTES
- According to Price Charting, Earthworm Jim has retained its value pretty well. The loose cart still goes for $15 to $25, depending on the platform, with double the price for the box and manual included.

- As mentioned by Pat on the show, here is Pacman with single-celled organisms!