- GamesIndustry.biz has an awesome, long interview with Rand Miller of Cyan Worlds on Myst, Obduction and releasing a game without a strong publisher. You can read it here, and listen to our show on Myst here!

- Brian Shea at Game Informer has a good piece on how Sega and Nintendo finally made peace over the years, and how Sonic appeared on a Nintendo platform. You can read it here.

- The spiritual successor to River City Ransom, River City: Toyko Rumble, has scooped up a good review from GameSpot. Listen to our show on the original game here.

- The early reviews on Sonic Mania are good so far.

- From The Daily Dot and other sites, the Warcraft movie now has an Honest Trailer out for it. Listen to our review of the game series here!

- PCMag.com has a slideshow on seven Mario games that never made it to the U.S.

- A little game called Fallout came out for the PC on Sept. 30, 1997. Amazing, a sequel came out only a year later. Both games had more in common with the X-Com series than the action-RPG Fallout has become, but they were very well-reviewed.

- Tales of Destiny, the second game in that popular series, came out on Sept. 30, 1998 for the PlayStation. In this game from Namco and Wolf Team, you play as Stahn and kill things with a big sword. It’s a weird kind of RPG-action game, but well-reviewed and well-received.

- Crash Team Racing, a completely and utterly original kart racing game, came out on Sept. 30, 1999. For more on Crash Bandicoot, check out our episode from a few weeks ago. And if you’d prefer our thoughts on some other racing game, try this episode.

Video game history information comes from GameFAQs and Moby Games. And as always, if you’d like to support the show, do so via our Amazon link.

Target, We Need To Talk (About Your Movie Section) 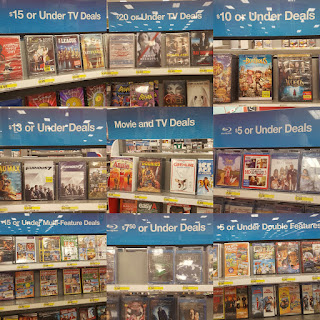 Dear employees and management in charge of Target’s movie section – What sort of vile madmen ARE you?

A couple weeks ago, I was looking for a copy of The Bronze. Admittedly, it’s not supposed to be a great movie, and it’s not especially popular either. But I wanted a nice, physical copy instead of having to deal with that filthy Redbox.

Instead, I was greeted with MADNESS at the Target in Seekonk. There were five rows of movies, each with different signs atop them. Was it in the new movies section? Movies under $5? Multi-feature under $15? Regular movies under $15?

MOVIES UNDER $13?!?! Why would you even have a sign for movies under $13? The other amounts kind of make some sense, since in the American currency system, we have bills in increments of five, 10 and 20. Thirteen though, Target? THIRTEEN?

I can hypothesize how this started. First, they probably had the normal DVD section, and a discount section for under $10. But then, movies got even cheaper, and they went under $5. And then suddenly, you had the common cheapo DVD practice of multiple features in one package. And THEN, you repeat the whole process over again with the introduction of Blu-ray discs.

But Target executives reading this post, enough is enough. You must bring about some sanity to your practices here. Let me offer you some suggestions:

1) Sort the movies into DVD and Blu-ray sections, and alphabetize them. OR, sort the movies all together, because it’s 2016 and almost everybody except old people have a device that doesn’t care whether you put a Blu-ray or DVD into it, because it’ll play it anyway.

2) If you want to have separate sections for kids movies, so that they’re not picking out The Aristocrats instead of The AristoCats, that’s fine. Likewise, you can do separate section for multi-feature films and television shows, as long as they’re sorted by alphabet.

I don’t even want films sorted by type, since that’s such a crapshoot now. Make people take that movie off the shelf and look at the back cover!

Email ThisBlogThis!Share to TwitterShare to FacebookShare to Pinterest
Labels: dollars, movies, Target, The AristoCats, The Aristocrats, The Bronze

Steveats: IHOP, what and why IS this monstrosity? 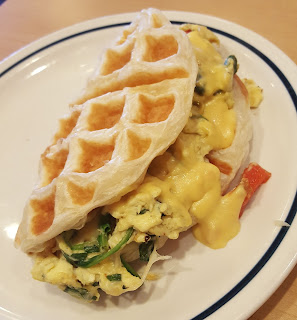 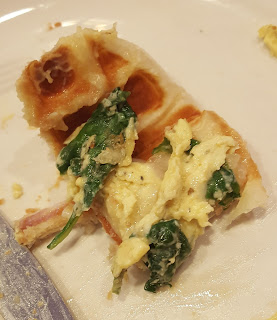 As my grandfather used to say, “Jeezum Crow IHOP, what IS this thing that you’ve created?”

The menu describes them as criss-croissants, a.k.a. waffled croissants. What they actually are is bastardized travesties of a normal breakfast. After this whole
cronut business, and McDonald’s going 24 hours on the menu, BREAKFAST HAS NO MORE RULES.

But without rules, there is anarchy. And in anarchy, disgusting, immoral things like the criss-croissants can happen. It’s basically like a soggy waffle with breakfast slash lunch stuff shoved inside of it. In my case, it was spinach and roasted red pepper. It wasn’t the most horrible thing I had ever put inside of my mouth, but it definitely wasn’t a product worth bringing out of the R&D labs.

Also, the pricing was very curious. For $8.50, I could get two eggs, two strips of bacon, two sausage links and hash browns. OR, I could get the same combo, plus a criss-croissant, for $9. So basically, because I’m cheap, I consumed an extra 500ish calories. (I can’t tell you exactly how many, because it’s not even listed on the ole IHOP menu.)

This criss-croissant is no reason to visit IHOP, unless you’re looking to consume an ungodly amount of calories on the cheap. In which case, it’s probably better to just frequent your favorite, local greasy spoon. Please do not reward these Dr. Frankensteins of Breakfast.

Want to support Steve’s blogging? Then purchase something via the Amazon clickthru link for Your Parents Basement, Steve’s other project! If you have a request for a future Steveats, leave it in the comments on here or on my Facebook. To check out some of the past Steveats, go here!
Posted by Steve G. at 9/27/2016 09:00:00 AM No comments: