I've got two somewhat-related project ideas tonight. For those unfamiliar with my previous post on this topic, you can check out it out here and here. The concept? Pitching ideas that I think would make fantastic movies or television shows. First up...

- Eating Dinner. This is based on the idea of Roger Ebert's old reviewing partner, Gene Siskel. Ebert has said several times that Siskel always asked himself one question about every movie he watched: Is this film better than just sitting in on dinner with the leads? I love that standard, because it's relatively simple to understand. 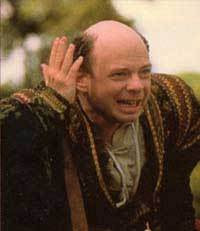 However, instead of using it as a standard to judge movies on, why not just film movies or a show based on the concept? Of course, there is the legendary My Dinner With Andre, which stars the great Wallace Shawn. Most of y'all probably remember him as the funny dude from The Princess Bride, another great performance. If he's willing to sign on for the show, then great! If not, then we'll have to look elsewhere.

Some of you might be thinking - Hey, what about Shatner? He did have a show that was pretty similar to what I was pitching. However, the problem with him is that Shatner himself is too much of a buffoon, and doesn't have enough chops, to make it work. You need someone who brings something to the table besides a broad caricature. Preferably, you would involve someone who isn't widely known for just one role, or who has range as an actor. Actors with developed personas - Christopher Walken, Alec Baldwin - wouldn't really work for this, and a complete unknown wouldn't be believable as an equal of whoever he was talking to.

Assuming there is no limit to who I can cast, then I find George Clooney and Edward Norton to be the best choices. Clooney just exudes cool, between his presence in Ocean's Eleven and tagging anything hot that moves in Hollywood, yet I don't really know much about the guy. The same thing goes with Norton, except he also seems slightly nuts. He seems to have a slight sense of humor about himself, given his appearances on Stella and Modern Family. In the past, he dated Courtney Love and Salma Hayek, which is range in pretty much every conceivable way. 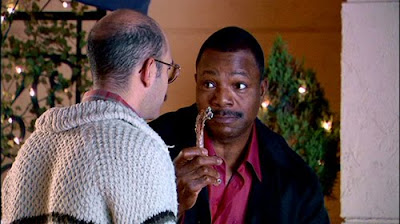 Now we got a stew going...
- Looking For Work. Now, this is the show that Shatner could be on, if he wasn't busy with his show based on Twitter.

The premise is somewhat similar to Lookwell!, which I've written about in the past. In that show, Adam West played an out-of-work television detective, Ty Lookwell, who was deluded into thinking he could actually solve crimes now. It was nonsensical, and absolutely awesome.

The twist in this show is that the actor would just play him or herself. Obviously, Adam West would still work for this, as would anyone else who is normally seen as being available for just about any role with a paycheck - George Takei, Michael Caine, Carl Weathers. You can imagine it as the poor man's version of Curb Your Enthusiasm, except that it would be a scripted show with the character playing himself.

Part of the beauty of this is that it allows you the opportunity for tons of silly nostalgia and self-referential humor, especially when it comes to the business. The show should be a spoof of some of the more outlandish aspects of the trade - remember how Robert Goulet had a sitcom? - by putting the lead in ridiculous situations every week that he or she is completely serious about. (Spoofs work best when the people don't realize they're in a spoof; nobody ever cracks up in Airplane! or The Naked Gun.)
Posted by Steve G. at 6/04/2010 11:00:00 PM