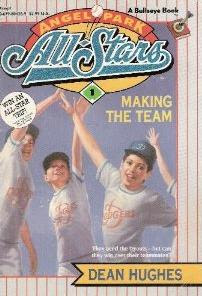 Over on the swell Literary Crap by Alison, I lamented about her recent post on The Babysitter's Club. See, as a teenage boy, I didn't really have an equivalent series to read. Except for a notable exception, most books fell into one of two categories:

1) Fantasy series that didn't have people living in the present day. I loved The Chronicles of Prydain by Lloyd Alexander and the Star Wars follow-up trilogy by Tim Zahn, liked The Chronicles of Narnia by C.S. Lewis, and sludged through the archaic writing of J.R.R. Tolkien. However, while all of them had some teens and younger characters, none of them were set in the present and dealt with real issues.

2) Detective books or mysteries with loose continuity between books. Encyclopedia Brown and the Hardy Boys and R.L. Stine, I'm looking in your direction on this, and I imagine Nancy Drew had the same thing going on, although I never really read her. I like a detective story as much as anyone, but it wasn't really the same thing as a continuous series with the same characters.

The one thing I read that didn't really fall into either category was The Angel Park All-Stars, a series of fiction books about a Little League in California. I got my hands on the first installment when I was about 10, which was the perfect time for me to read about hot-shot rookie Kenny Sandoval, the new star shortstop of the team, despite his modesty.

Kenny's dad was a patient, former Major League Baseball player, and he made the team with his two best friends... who's name I can't remember. Uh, one was a big clumsy kid who played first base, and the other was a pesky little runt who didn't hit much and mostly sat the bench and played outfield. (In reflection, I could commiserate with all of them: I started my Little League career as a shitty outfielder, becoming a Doug Mientkiewicz-type first baseman, and then, oddly, moving to shortstop and second base my final year.) Some of the other players had better nicknames, like "Burner" Bunson, the hot-tempered fastball pitcher, and Jimmy "Running" Waters, nicknamed so because he always had to go to the bathroom.

The series starts with the boys making the team, and follows them as they win some games in the Little League all-star league they were apparently in. I'm guessing this was some sort of thing that happens when you live in an actual city - Once our Little League season was over in May or June, you were lucky if you played more than a couple All-Star games. Of course, they're pretty successful as a team, because otherwise how do you have a 14-book series?

Which brings me to a problem I had with it - The books were hard to find! I bought the first three when I was at a bookstore with my Aunt Maureen, if I recall correctly; she would bring me to them, since we both loved to read. I was able to get another couple from the library system, but even they only had about nine books of the series, and they weren't all sequential. To this day, I haven't read all 14, and I haven't read any of the spin-off series, Football Stars and Hoop Stars. Even eBay surprisingly doesn't have people offering all 14 books for sale, just scattered one to three book packages. There are only two copies of #14 for sale, for $7.63 and $55.48. ack!

Also, in researching this series, apparently author Dean Hughes is a big-time Mormon. His official website is either dead or down right now, but I picture him living the clean life with a super hot wife in Utah, laughing his way to the bank as he lives off his Angel Park All-Stars money, and caring naught that millions of young boys across the United States have only read a portion of his saga.