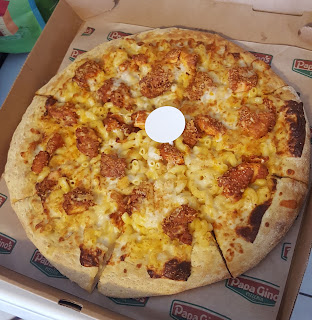 According my notes, the last Steveats I did was in honor of Valentine's Day and my birthday, and for that, I had the Naked Chicken Chalupa from Taco Bell. Obviously, it left such an impression on me that I did not bring this feature back for 15 months! (The boring, real answer though – Man, life sure does get busy sometimes, huh??? Plus, when you're living with another human being as I am now, you manage to eat a lot better.)

With my significant other gone for a month, well, that has left me with some free time to really explore the studio space of Steveats. You know... EXPLORE the studio space. So, without further adieu, I bring you... The Papa Gino's Buffalo chicken mac and cheese pizza.

I had somewhat high hopes with this one, because, hey, it's kind of hard to screw up Buffalo chicken! It is one of the world's most magical and wonderful substances. You can use it in a wide variety of delicious things, whether you're having it straight-up or mixed with blue cheese. Or ranch, if you're a soulless monster.

Apparently, a fool they thought would pay $18 for a pizza. Thankfully, I had a coupon, so the total damage was just $13. Still, this was disappointing. The mac and cheese was also really bland, which surprised me, since the Papa Gino's all you can eat pasta is usually serviceable, as is their pizza.

Anyway... I still ate the god damn thing over the course of two and a half days. It was still tasty, but disappointing. Missed potential, like watching a high draft pick flame out on your favorite team. As of right now, the plan is to have one Steveats a week, but we'll see how that goes, and how motivated I'll be to keep eating (mildly disappointing, usually) junk food.

Want to support Steve’s blogging? Then purchase something via the Amazon clickthru link for Your Parents Basement, Steve’s other project! Or, you know, check the show out! If you have a request for a future Steveats, leave it in the comments on here or on my Facebook. To check out some of the past Steveats, go here!
Posted by Steve G. at 5/02/2018 06:00:00 AM