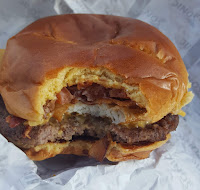 Before I moved to Texas, Sonic was really pushing its brunch burger. For $2.99, you got an order of tots and the burger, which was topped with an egg, bacon and cheese. And let me tell you – The burger was a delight!

An egg on a burger is always a delicious decision, but many other places screw it up by keeping all of the other fixings, like lettuce and tomato, on there. The result is typically a slippery burger mess. But the Sonic burger was surprisingly put-together, and it was great value, as far as fast food burgers go. Because I've been such a slacker with this feature, the burger debuted in March 2019 and I'm only writing about it now, but my lethargy means its probably returning soon!

Now that I've recommended the burger to y'all, let me also share – On my last trip to Sonic, well, they served me a moldy bun.

This was in November, at the Cinco Ranch branch in Texas. I was looking for a quick bite after a football game – one of the few they didn't offer food at – and decided on Sonic, since my last experience with the brunch burger was so positive. I got a standard burger, and a hot dog.

The service was slow, and on top of that, I got about halfway through my burger when I saw that there was mold on it. GREAT. Obviously, I survived, but I was grossed out. To make matters worse, I tried to get a refund for it, and basically hit a dead end with Sonic's customer support. I even had a picture of it, which I have not put on this entry, for reader benefit.

Sooooo. I will probably go to Sonic again at some point. Like, stuff happens. You get a shipment of items late, you get an employee that doesn't care or notice, and so on. Steve gets served a moldy bun. But, I'm probably not going to go to THAT specific Sonic anytime soon, plus, there are so many other options in Texas that I need to check out that a return visit to Sonic isn't high on my list.

Want to support Steve’s blogging? Then purchase something via the Amazon clickthru link for Your Parents Basement, Steve’s other project! Or, you know, check the show out! If you have a request for a future Steveats, leave it in the comments on here or on my Facebook. To check out some of the past Steveats, go here!