Keeping it in the family with Glee 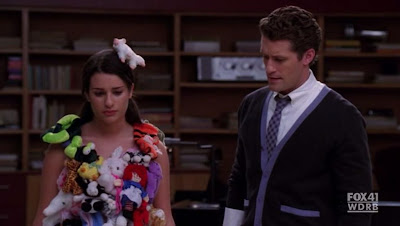 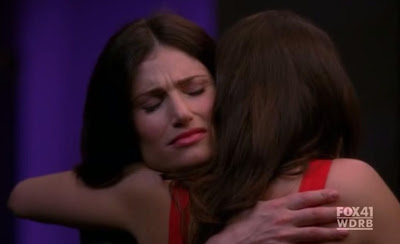 Although both main story arcs on Tuesday night's Glee dealt with irregular family situations, only two of the characters - Rachel and her mom - came across as likable considering the circumstances.

While I'm not generally a fan of Rachel because of her smugness and cockiness, I do enjoy when she is portrayed as an actual human being and not a stereotype. Tuesday was my favorite "Rachel" episode of the season, since she is so vulnerable and therefore accessible throughout the episode. Her initial Lady Gaga costume - pictured above - is one of the best sight gags of the second half of the season. And I also think the slow, gradual development of the relationship with her mom is the right decision for the show to take. There is enough camp in a typical episode of Glee to resist making them best-friends-forever right after their initial meeting.

However, the other main arc of the episode - friction between Finn, Kurt and Kurt's dad - felt completely flat to me. I think it's unrealistic to portray Kurt's dad as the only person on the show who doesn't realize that Kurt is in love with Finn. I also don't think Finn would have allowed things to proceed as far as sharing a room with Kurt without mentioning this fact to either his mom or Kurt's dad. As a result, I found everything about this plot arc, including the horrible Gaga-dressing by Finn, to be unrealistically out of character.

The little odds and ends of the episode helped to make up for this though. The other mini-issues of the episode - Quinn and Puck squabbling over the name of their child, and Tina trying to deal with her new dress code - were both interesting. There were also some quirky, winking at the camera moments on the show, mostly between Rachel and her mom. 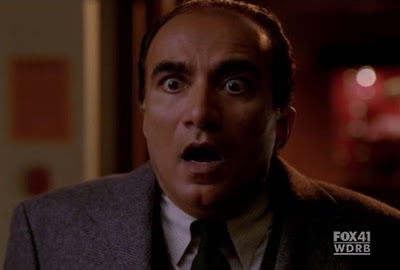 And, I've got to give props to Iqbal Theba, who plays Principal Figgins with the perfect mixture of ignorance and authority. In Tuesday's episode, he insisted that Tina stop dressing like a goth because of his worries about Twilight and vampire problems, only to be harassed by Tina into reverting the dress code because of his irrational fear of vampires. While this served as the catalyst for the show's Gaga theme, it was unfortunately kept in the background and used mostly as a bookend.

Also, unlike last week's episode, Brittany was back to her ditzy, quotable self. (She suggests that Tina dress up as a cross country skier, a Happy Meal with no onions or a chicken. When Rachel comes in with her sadly pathetic Gaga outfit, Britt says, "You look horrible. I look awesome.") I've found that on the Internetz, the Brittney and Santana combination is known as Brittana, which is awesome.

There are two episodes of the season left, and I imagine we're going to see a bit more focus on singing and dancing, since the sectionals are coming up to end the season. At least, that's what I'm hoping for - While the drama of the first season has been high, I do think it would be more appropriate if they focused on the actual Glee club with the final two episodes as opposed to leaving us with drama-filled cliffhangers at the end of the season.
Posted by Steve G. at 5/27/2010 07:00:00 PM