A sneak peek of the other upfronts, and Pitching Perfect Projects 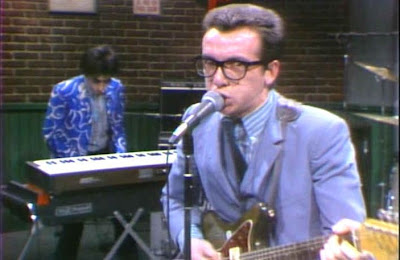 Note: Elvis Costello should have his own sitcom.
Continuing on my post from yesterday, and from the excellent dispatches from the upfronts by Slate's Troy Patterson here and here, my thoughts on the new shows pitched for the upcoming fall season...

- Lonestar is about an oil tycoon con man trying to keep it all together. A FOX show, it'll probably be canceled at the first sign of ratings trouble. I'm not really that interested in the concept; this sounds like the type of show that will be crammed down my throat in promos during the baseball playoffs, only to disappear from the fall schedule after a couple episodes. (However, in case anyone has forgotten the lesson pounded into our heads from past postseasons, "Her father is the DISTRICT ATTORNEY!")

- I like the pedigree of Running Wilde, which has Will Arnett and Keri Russell in it. However, as good as Arnett was as Gob Bluth, he has produced a lot of... well, shit, since then. It would be a shame if that was his career peak, but it has happened to actors a lot better than him. Therefore, I'm going to remain cautiously optimistic for his new show.

- Mixed Signals got the best response from the mostly-old-dude crowd at the FOX upfront, so I will try to check it out in the fall, even though I know almost nothing of it. Raising Hope sounds horrid, even from Patterson's short description of it as Three Men and a Baby minus two men. Doesn't Two and a Half Men fill out quota for shows-without-moms needed on network TV?

Better yet, I think we need a ridiculous premise show that goes the completely opposite direction. Therefore, I am proposing a new show, which I call Four Lesbians, Two Babies and an Elephant. (In case "lesbians" in a show title doesn't fly, my alternate title is Four Women, Two Babies and an Elephant.) Of the four women, two would be doctors - they're very popular with executives - one would be a spy, and the last one would be a drug addict. If one baby means ratings, then two babies mean DOUBLE ratings. And, any show can have a puppy or a kitten. To spice things up, these gals need an elephant.

- At the ABC upfront, No Ordinary Family sounds like it could be a winner. A drama about a family with superhero powers? Yes. Sign me up. Heroes was awesome until it started adding 500,000 different characters, so focusing on just a single family of heroes could be interesting.

- In contrast, I'm not sure how much I'll like Mr. Sunshine with Matthew Perry. In the early seasons of Friends, he was savagely sharp and funny. But as the show was increasingly pitched toward female viewers and the female characters, he lost a lot of his edge. If he is back to his snide-as-eff character, then I'm in. If he's pining for some woman in the first episode, I'm out.

- Off The Map and Body of Proof sound like rehashes of shows currently on the air. If they're decent, I'm guessing they'll just piggyback on to the existing shows. Neither one sounds like it has breakout potential.

- And finally... The Shatner show based on Shit My Dad Says. My goodness, I'm excited. Two reasons: It will either be legitimately good, or it will be so bad it is great, because Shatner is involved. I really don't see any middle ground on this, although I think it's far more likely that it sucks, like the show based on the Geico cavemen. I do like my friend Tom's suggestion: It should be renamed from Shit My Day Says, which won't fly on network television, to Shatner My Dad Says.

The picture of Elvis Costello at the top of the blog is from this blog, which is in some foreign language. The lesbian photo I modified a bit, but found at this blog. The baby photo is from here. And Dumbo is from this blog.
Posted by Steve G. at 5/20/2010 11:00:00 AM