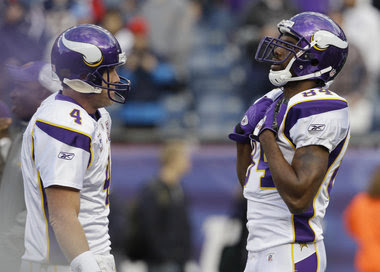 Matt: So, that was a short Randy Moss return. I'm not sure what exactly is going on with the Vikings, but I really hope someone is writing a book about this season. It's shambolic. Childress had lost the dressing room before Moss, but at this point, I wonder why even bother holding on to him to finish out the season. I'd have more confidence in Leslie Frazier.

-----
Bob: My real question, Matt, would be why Childress was ever around in the first place. It's not like he had done a stellar job (last season wasn't exactly attributed to him--in a season where the Vikings went 12-4 and had an argument as one of the best teams in the league, Childress got one vote for Coach of the Year) and he was already fairly notorious for bad clock management--a key skill for NFL coaches. In a world where Jon Gruden, Brian Billick, and Bill Cowher are on TV, it's inexcusable to keep Childress (or Wade Phillips) as a coach.

In other news, I'm not sure how the reports of Randy Moss lighting into the Vikings' caterers makes me feel. I have always been very sensitive to how people treat service staff, particularly because my mother was once a waitress and I cut my teenage chops at a Blockbuster Video. I think it's a real measure of someone's character when you see how they treat some poor bastard who is earning minimum wage to deliver you food or other services. A lot of people really take the opportunity of having someone serving them to be a bully, and I think that proves what jerkoffs some people really are. Randal Graves was right when he said "this job would be great if it wasn't for the fucking customers."

-----
Steve: I totally agree with you, Bob. How people treat minimum wage workers is typically a pretty good judge of character. Then again, like you, I might be biased because I worked at Dunkin' Donuts for two years. As a wise man would say, go spit Randy Moss.

Matt, I think they keep Childress out to play the string just so they don't have to deal with even more chaos by getting some new, lame duck coach in for the rest of the season. Anyone good - Parcells, Cowher, Dungy - isn't going to want to take on that quagmire (giggity giggity) in the middle of the season. Anyway, on to the standings: