Pickin' Pigskin: Week 8 (and rallying for sanity in D.C. and Tulsa) 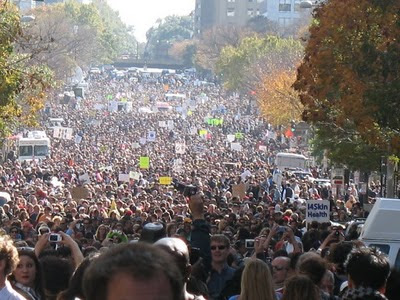 Bob: Well, it's that time of the week again. Sorry we're sending the picks in late--we just got back from the Rally to Restore Sanity. Let me just say this: I haven't seen DC this crowded since the inauguration. Since this was a fake rally for no real issues, I don't really know how that makes me feel. Except to say that I'm pissed that I couldn't get on the Metro. We tried to get on at about 12:45 p.m., and we were told by people on the absolutely full train that they had all gotten on at the FIRST STOP on the Metro. So we took a cab.

The rally had lots of good signs and stuff, but we couldn't hear a thing from Stewart/Colbert. They clearly weren't ready for a crowd that size (and neither was the National Park Service, which had fenced off portions of the Mall that the crowd ended up knocking down. The amazing part was when we decided to split, and downtown D.C. was basically shut down because the crowd had overflowed. There were a bunch of people dancing on some kind of dragon float. We ended up having to walk about 15 blocks to find a place to eat (where we proceeded to wait about an hour to eat, because they weren't ready for a crowd at 3 p.m.).

On the way back, I smartly looked into the Metro station before we went through the turnstiles, and saw the platform was packed. So we walked from downtown D.C. back to our condo, which in itself was a trek because we had to go through Georgetown, which is the place to be on Halloween. Even as we walked across the bridge out of D.C. at 6 p.m., traffic was snarled getting out of the city. So today will be known as the day that Jon Stewart broke D.C. (with help from people going out for Halloween).

I'm sleepy after our big day on the mall. If you're interested I'm gonna post some pics on Facebook. So this is all you get this week. 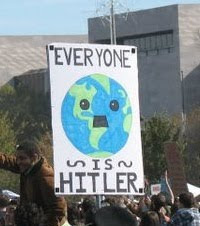 Matt: I'd like just to take this moment to plug Tulsa's win over once-mighty Notre Dame (last mighty in the 1980s). Though our coach inanely and repeatedly called it the biggest win in the program's history, this isn't the case. Not to say that it isn't a big win, and I don't love that we beat the so-called elite.

But I don't think it's a bigger win than, say, beating Oklahoma on the road in 1996. Or of any of our bowl wins when they meant things, like beating Georgia Tech in the Orange Bowl in 1945. I mean we were the first school to be in five consecutive New Year's Day bowl games. We've won conference championships. We hold the record for largest margin of victory in a bowl game in history from 2008. It's degrading to the program's history to call a win over an exceedingly mediocre Notre Dame squad the biggest win in the program's history. 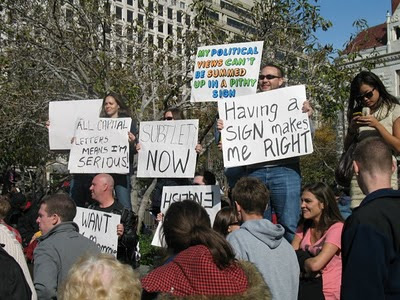 Steve: As y'all can probably tell from my posting time on this, I'm exhausted, and this whole "launching a site" thing is pretty time consuming. I promise to not mail it in next week. And, I'm secretly very envious of you, Bob and Kristin, for attending the rally. And I'm sure all three of us are envious of Matt, since we all went to the University of Rhode Island, which hasn't had a good football team in years.