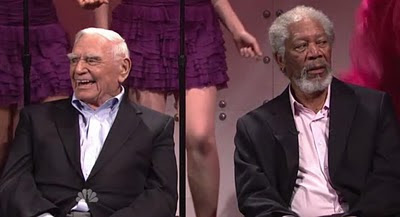 Last night's Saturday Night Live was better than the season opener, which is somewhat surprising, given the differences in cast. Yeah, Bryan Cranston is an upgrade on Amy Poheler, but there weren't nearly as many celebrity cameos.

But in contrast to the opener, the ones they did have were used in one of my favorite skits, "What Up With That?" My friend Tom noted that it's a bad sign when it's on early in the show, which turned out to be true, but the actual skit with Morgan Freeman, Ernest Borgnine and Lindsay Buckingham was as awesome as usual to me. (p.s. Morgan, drop the earring. It looks weird.) 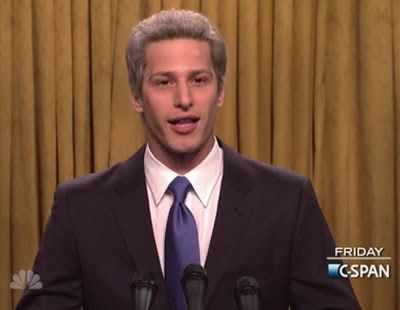 Unfortunately, the rest of the show was just average, outside of the opening with Andy Samberg as the departing Rahm Emanuel. Also, WUWT was the only skit to use Jay Pharoah, who seems like he had breakout potential. After his awesome Will Smith impression in the first week, how can you not use him more, Lorne Michaels? Heck, he didn't even get to do Obama, even though Fred Armisen's version really, really sucks.

Part of the reason why the rest of the show was average, though, and not bad, was because Lorne obviously got my memo from last week. Wiig was in less skits this week, which helped the overall quality. What did suck was that she was the "sexy girl" in a skit that also had Abby Elliott, which makes absolutely no sense. Oh, and also, in this skit she was gagging, burping and farting, among other fun stuff. Lovely.