Pickin' Pigskin: Week 4 (and thoughts on television and Maxim)

First things first, the standings from last week. It was a good week to be a man. Overall standings are in parenths.

And now, the commentary and picks for this week… 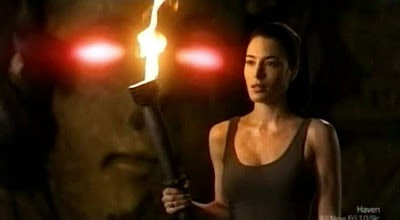 Really, though, I didn’t come here to talk about football. I came to talk about Warehouse 13, which is strangely one of the better shows on television (and unfortunately, on hiatus right now). I finally caught up with this season on my Tivo. If you are unfamiliar with the show, it is basically about a warehouse much like the one seen at the end of Raiders of the Lost Ark. It is on the SyFy channel and is clearly done with a low- to medium-range budget.

The show is camp at its best. They do a great job of spoofing a lot of things that are popular in science fiction/fantasy/Internet culture. For example, in a recent episode they characters went to an archaeological site in Egypt. One of the characters (H.G. Wells, who is a hot woman and was frozen for 70ish years) looked on the Internet to find what “modern British archaeologists” wore. Of course, when we saw her dressed she was dressed exactly like Lara Croft.

Another episode focused on the super-volcano under Yellowstone Park, which is a favorite obsession of Internet nerds worried about the end of the world (along with the possibility of a Canary Island Mega Tsunami and black holes from the Large Hadron Collider).

So if you’re looking for something to do now that the Red Sox are officially eliminated from the playoffs, consider catching up on Warehouse 13. 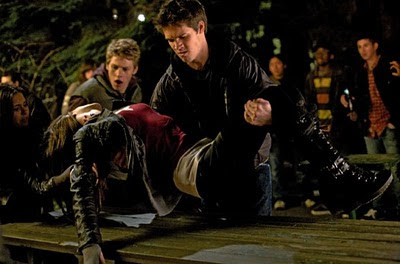 Kristin: I feel guilty about not writing anything the past few weeks. So, here it goes!

Tennessee is my enemy. No matter what I pick, I always pick their games wrong. Frankly, I hate them, but I’ve heard Denver is weak right now soooo I’m picking them anyway.

Now, I think that I could be just as good a quarterback as Rapey McRaper if I was also enormous and good at not getting squished, so I don’t see any problem with replacing him with random nobody quarterbacks. However, I don’t see how they win four straight without him, so I’m picking this to finally be their loss.

I love Cincinnati like I love trashy television, so go Cinci!

I really enjoy rooting for Detroit, and while they never win, they often come fairly close so I like this spread.

The Saints game was close last week I think, so I’m betting on the spread on this one as well.

San Francisco and Atlanta, who cares?

No way St. Louis wins two in a row.

I’m hoping that Buffalo can pace the Jets like they kept pace with us for three quarters of last week, or win and shove it in QB Hepatitis’s face.

Alright, now I know that Houston looked like the Boys’ bitch last week, but I love this team. I love how young they are, I love how they beat Indy, and I would love to see a different team making it far in the playoffs.

San Diego, I still have a grudge against due to LT being a bitchy little woman. p.s. I don’t care that he plays for the Jets now. The Chargers can still suck it.

Uggggggh, so I really really really want the Skins to roll into Philly and make them eat the shit they’ve been talking, but I’m not an idiot.

I keep picking against Chicago because I think they suck, especially after being forced to watch some of their blowouts last season. However, against all odds they keep winning so I might as well start picking them. Also, eff the Giants.

I love when the schedule works out this way, playing Miami in Miami early in the season so we can play them at home in the snow. Oh, and the Brady haircut is growing on me, it’s sexy all tousled and sweaty.

My other favorite at the moment is House. I love seeing him happy, I love that sly sexy little smile he gets when he’s happy, and I am so nervous for what happens next.

For new shows, I hated My Generation. I hated the narrator’s voice and how transparent the whole setup was. I think this show would have been great if it was a real documentary, they could have followed my high school class or a million others. I feel like this fake-ass story was almost insulting to us.

Another disappointing new show is Top Chef: Just Desserts. While I love Top Chef, I feel like it is more difficult to tell based on looking at the food and listening to how it is described to tell if you would like it or not. Further, watching Just Desserts, I don’t become ridiculously hungry and want to eat every piece of chocolate in the house.

We finally watched an episode of Glee, and while I thought the singing/dancing was phenomenal, the interaction between characters is tiresome- they shouldn’t speak.

Lastly, I regret to admit, Bob has been successful in converting me to a Fringe fan. However, I am mighty pissed off at what they have shown in previews of FAKE Olivia making out with Peter. I hate hate hate this idea that men are so bloody stupid they can’t tell the difference between the woman they love and a fake. It isn’t just Fringe, this is something you see repeatedly. I mean, Swan Lake, hello!? DON’T KISS FAKE OLIVIA, SHE IS EVIL!!!

This is one thing I love about Vampire Diaries, the brother dating the main character was able to tell the difference between her and her identical across time and space evil-vampire twin, whereas his brother could not. In this case, at least one man was smart enough to know who they were kissing. Is it really that hard? Thank god I’m tall and difficult to mistake, otherwise who knows who Bob would accidentally be kissing. 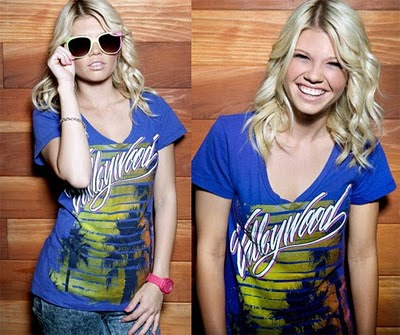 Matt: If we're going to talk about television guilty pleasures, there's one show that is far superior to all others - Rob Dyrdek's Fantasy Factory on MTV. It's wonderful. Rob does all of the little things, pranks, and time-wasting adventures we liked to do in college when we had free time and few responsibilities.

Except for one thing: He has the money to do them properly. So he's converted a giant warehouse into some office space for his family members, put in a giant skate park and ball pit, complete with basketball hoops 30 feet into the air. Mishaps and hilarity ensue, ranging from getting his receptionist a spread in Maxim to destroying his cousin's car and replacing it with a car with a furry cat covering. Good good stuff. I'd like to think I'd display this creativity in use of several million dollars if I had it. 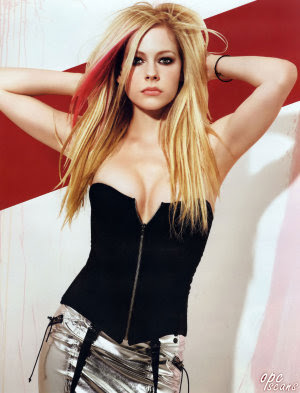 Steve: Speaking of Maxim, since Matt brought it up briefly… I somehow ended up with a subscription two years ago. I don’t know how it happened; I blame Electronics Boutique Gamestop. They sometimes ask me some blah blah blah about if I like magazines when I buy something.

I would cancel my subscription, except that I’m not being charged for it. I don’t know how this is happening. However, looking at my credit card bills, I haven’t ever paid money for it. This makes me worry that if I try to cancel it, they’ll notice and then bill me a couple hundred for the two-plus years I’ve gotten for free.

I don’t even like the magazine, by the way. Yes, there are very, VERY attractive women on the cover. However, I have the Internet, so I can literally see attractive women whenever the urge strikes me. I don’t need them delivered to me in the mail, so that my roommate and other attractive women think I’m some pig who reads Maxim. It’s a Catch-22 in my head, between my twin desires to be cheap (and just let them keep delivering) and to be not creepy (and canceling the subscription).

... This whole paragraph does give me an excuse to include a Maxim cover photo though, which isn’t the worst thing in the world. Go me!

The Warehouse 13 picture comes from this awesome recap site. The Vampire Diaries picture is from here. Chanel the receptionist is from this site. And Avril, who I will admit I have a small crush on, is from this site about her German Maxim spread. And finally, the actual picks are below: