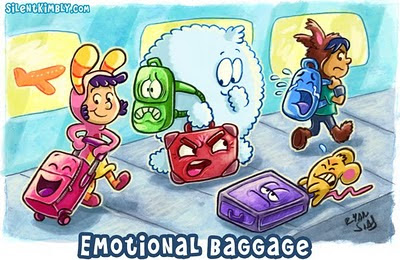 Welcome to another edition of The Baggage Game! This was actually supposed to post last night, but something got buggered up, and I didn't notice until now. Hence, the weird title. As usual though, you can find the Excess Baggage here, and the episode itself is linked at the bottom. And the neat image above is from this artist's website.

Today's contestant is Danny, a website designer from Kneilworth, New Jersey, and he's wearing a smart vest. He wants someone who can appreciate horror films. He kind of looks like a Jonas brother.

The first potential dater is Sharla, who is billed as a "dancer" from Apple Valley, California. She is tall, busty and blonde, but dressed conservatively, so she might not be THAT kind of dancer. (She definitely could be though.) Next up is an "agency representative" from Houston, Texas, named Ty. And finally, there is Evelyn, a public relations rep from Key Largo, Florida. I dislike her immediately because her blouse is tucked into her super high shorts. Of the three, Sharla definitely wins the beauty contest.

Sharla says nothing is sexier to her than a girl with a knife. Well then. Ty's baggage makes her sound like she's horrible with money. And while Evelyn's baggage is gross, I do plenty of gross stuff too, so that wouldn't really dissuade me.

Second Round
Sharla: I kissed a girl and I liked it.
Ty: I plan my wedding after the first date.
Evelyn: I was rejected by an online dating site. (Jerry says, "Maybe she had some kind of virus.")

The first baggage is pretty benign for Baggage. Seriously, I'm sure plenty of gals have drunkenly kissed another gal. The second girl would be the most worrisome to me, and I'm generally a guy who likes commitment. You plan the wedding after the first date? The first one??? Goodness. (The crowd agrees with me, and lets out an angry scowl.) Meanwhile, I imagine the girl who got rejected is either bisexual, or she was already in a relationship at the time. Otherwise, I can't imagine why you'd get the boot.

But somewhat surprisingly to me, Danny decides to reject the dating site girl, and to keep the marriage woman. The online dating site woman turns out to be Evelyn. It turns out she was on some site where you describe your ideal guy, and it couldn't find him for her. This sounds like somewhat weak baggage to me, but whatever! I definitely would have kept her over the marriage girl, which turns out to be Ty. And Sharla continues to seem more and more appealing.

Time for the Hot Spot! Sharla is best described by "Genie in a Bottle" (note: limited to Christina songs), she will brag about being able to fit in her prom dress at her next high school reunion, three times a night is too many, she would blast her music to get Danny's attention at a traffic light, and fooling around is best when the moment strikes. (Note: Sharla has a tattoo of like a wristband on her leg, which is very distracting.) Ty likes Rob Pattison (the Twilight dude) over Rob Lowe, she spends too much money on perfume, when she's alone she likes to sing naked to her imaginary American Idol fans, and the one word she would use to describe Danny is hot.

Final Elimination Round
Sharla: I don't believe "fooling around" is cheating.
Ty: I poke holes in condoms.
Evelyn (eliminated): I emptied my bank account for a psychic.

Ick Sharla. And we were doing so well together! She clarifies that flirting isn't a big deal to her as long as she's coming home to him. However, her overall package is still WAY better than Ty, who clearly wants to get pregnant right away or something. Ye gads! She says she's really ready to move forward in her life. The already-eliminated Evelyn also sounds nutty, since she says she's into the psychic still.

Danny thinks it over for a minute, and then sends my girl Sharla home. Womp, womp, womp! He and Ty hug, and exchange a little cheek kiss. Danny's baggage is one of these three:

- I falsely impersonated a priest.
- I live in a tree house.
- My penis is all over the Internet.

The penis thing is definitely the worst. I'd hesitate if a girl I was dating had her boobs or vagine (in Borat terminology) all over the Internet. The tree house thing suggests to be some sort of hippie freak, which would also stink, whereas I would associate the priest thing with Halloween or a prank.

Ty says she would have a problem with the tree house thing the most, but Danny's actual baggage is the wang thing. He said that in 2006, he was a Playgirl centerfold. (Note: I am definitely not looking this up or providing a link for it :/ ) He said the shoot is available all over the Internet, and it gets some catcalls from the audience. Ty says she can accept his baggage though, and they kiss briefly on the lips.