Dear guy on a pole, thanks a lot, jerk. 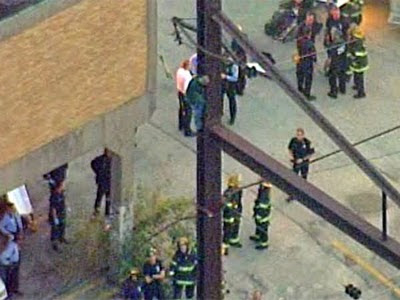 This great picture of the jerk on the pole comes from this
site, which has a really good sum-up of the whole thing.
Although the title suggests something really lewd, that is not the case - Sorry to all of you fans of men on poles out there. I don't mean some sort of sexual joke with the title, I mean that literally, a guy climbed to the top of an electrical pole in Philadelphia.

Normally, I wouldn't care about this. However, because I was in New York City, waiting for a train, this presented quite the conundrum for me. Our originally scheduled train for 7:30 p.m. was delayed until 9:45 p.m. because they had to cut the electricity while they helped down the dumb asshole who shocked himself trying to steal copper wire. (For the record, I voted that I was "furious" about the story.)

As a result, I'm not scheduled to get back into Kingston until 12:45 a.m. Ugh. I was planning on doing some things Wednesday morning, but that time is most likely going to be sucked up with rest and recuperation time. The lights are on on the train, so I can't really get any shuteye.

I also have a pretty full week scheduled - The high school newspaper deadline for the kids is Wednesday, and Friday for me, followed by my site launching Monday, which means a lot of prep work for me. Exciting times, but really busy times, unfortunately. I'll try to keep y'all updated with the blog, but my next couple days of entries will probably be shorter.
Posted by Steve G. at 10/26/2010 11:10:00 PM