You hate your life if you're not watching Community. 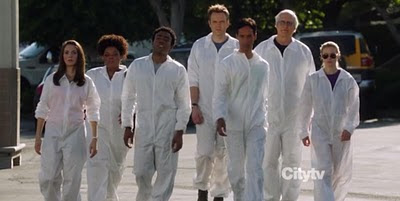 Hey, are you watching Community yet? Sources, specifically Blast Magazine and its television ratings report, tell me that Outsourced has more viewers yet AGAIN. Therefore, the Community posts shall continue!

Last night's episode was a spoof of Apollo 13, I think. I'm not sure because I never saw that movie - womp womp womp. However, it was still hilarious to me. The gang gets trapped in a space simulator, fight with one another and Pierce is actually funny as he has to deal with space madness, Ren and Stimpy style.

But with teamwork and finger-lickin' goodness, the team managed to complete the heavily KFC-branded simulation. It was an especially strong episode for the dean and his gay tendencies, Senor Chang had a great five second cameo, and my love affair with Troy continues. I thought he was hilarious in his role as the captain of the simulator, and I definitely liked the slight tease they had when Brita landed on his lap. 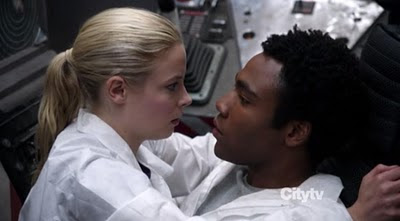 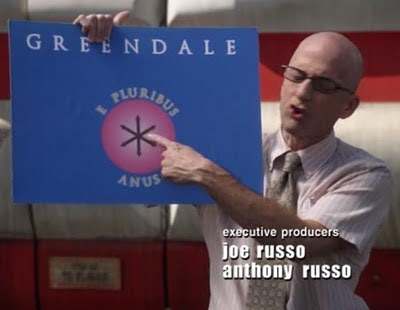 Also, that thing to the right? That's the community college's flag. What aren't you watching this show??? Why do you hate your life and deny yourself this enjoyment? So as a final enticement, here are some quotes that would only be super hilarious if you had seen this great, great episode:

Jeff: Pierce! You're talking to an Atari cartridge. Sit down.

Jeff: Our school may be a toilet, but it's our toilet, and nobody craps in it but us.

Brita: How many schools would let you get a degree in theoretical PE? 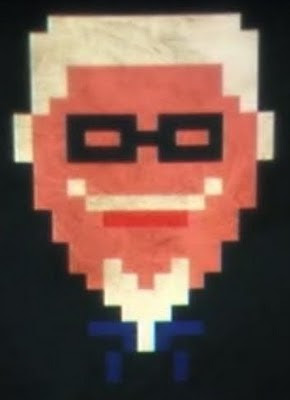 Dean: *shows them on the map where the city impound lots are*
Abed: It looks like you circled public rest rooms and truck stops.
Dean: Ohhh, okay... That is a different side of the map, and that is... for... a different project.
Abed: Why do they have star ratings?

Troy: There is a time and a place for subtly, and that time was before Scary Movie.