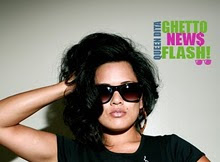 Ah, time for another edition of The Baggage Game! As usual, you can find the Excess Baggage here, and the episode I'm blogging about is linked on the bottom of this entry.

Today's dater is Anthony, a salesman from Philadelphia. He looks kind of like Dule Hill from Psych and The West Wing. He's looking for a classy lady with goals of her own who isn't stuck up.

The first potential dater is a journalist, Dita, from Tijuana, Mexico. I wonder if she's fleeing death threats from a drug cartel; this might also explain the huge comb-over she has on one of her eyes. However, in this case "journalist" is code for "does videos about hip-hop artists" and doesn't really refer to reporting. You can find her Blogger profile here. She says she won't let anything get in her way of winning Anthony's heart.

Next up is Kim, a saleswoman for L.A. She says she hopes Anthony and her "can take a few steps together" toward reducing their carbon footprint. I have no idea why that's supposed to be alluring. And finally, we have Kia, a researcher from Dayton, Ohio, who bills herself as an independent woman with an active lifestyle.

First Round
Dita: I believe The Bible is a hoax.
Kim: I only have sex with the lights on.
Kia: I must pick out my man's clothing.

Anthony doesn't view Dita's issue as a positive. Dita says there are good lessons in there, but she thinks that parts of it are fabricated. Pretty reasonable to surmise, at least to me. (Random note of Dita: She has a huge tat of something right on her bicep. It is highly distracting.) Kim's baggage doesn't really strike me as baggage, since I don't mind being able to see what I'm doing. Meanwhile, Kia is coming across like a control freak. It doesn't help that she adds, "I like to wear the pants in the relationship, and I like to pick them out as well."

Second Round
Kim: I wear disguises to spy on my boyfriend.
Kia: I won't cook, clean or do laundry. (Jerry quips, "It sounds like she's already married.")
Dita: I cheated on an ex with my employee.

Wow - That first girl would need to GTFO. It just reeks of craziness AND control issues, which is a nice double whammy. The ex is mildly concerning, but it could just be an isolated incident. Whereas the no cook, clean or laundry person, I wouldn't mind that so much, because I imagine she's bringing plenty else to the table to make up for it.

Anthony eliminates the no cooker though, which turns out to be Kia. Well, no great loss there. The two girls snipe at one another, and Kim actually has the wig she used to go spying. ick. And now, we're off to the Hot Seat now!

Dita's New Year's Resolution was to cut down on eating, she suggests the slogan "It's all about faith, baby!" for Anthony, she needs passion in a relationship, when she was five she wanted to be a journalist growing up, and hip-hop defines her style. She THEN adds that she's going commando today (direct quote!) and otherwise, she would bust a move, so instead, she does a rap. ack. Kim's biggest vice is smoking, nothing turns her on more than getting her hair played with, she thinks men don't understand that little things mean a lot, her biggest fear is bugs, and her go-to dance move is a wind.

Final Elimination Round
Dita: I've been arrested for shoplifting.
Kim: I participate in sex auctions.
Kia (eliminated): I'm a cheater and I've never been caught.

Well, uh, I guess Kia won't be showing this tape at get-togethers... Dita's baggage is pretty mild as far as the final round goes, so she would definitely be my choice. (This also makes me feel better about posting the link to her profile up above.)

Meanwhile, Kim, good lord. Anthony says he doesn't even know what that is, and I'm with him. Kim says that you go to an auction, and people bid on having sex with you. She let herself be bid on, and the winning price was... $300,000??? What the hell! I have NO idea why anyone would pay that much for her. She looks like a female version of Webster. She further explains that it was "for charity," although I wonder how the hell a charity writes off a $300,000 donation from a sex auction.

Kim sounds like a complete nut show, and Dita seems pretty normal, so I wouldn't hesitate in eliminating Kim. Anthony thinks it over though, and does the complete opposite! Anthony, you scum bag. Sigh. Anyway, his baggage is one of these three...

- I hire a prostitute every year for my birthday. (My guess.)
- I went to the prom dressed as a woman.
- I've had several high speed police chases.

Given how he's willing to accept Kim's sexual baggage, I'm assuming that Anthony's baggage is the prostitute thing. All three are kind of weird and/or gross to me, although the prom thing is the least worrisome. I could see plausible explanations for that.

Kim says she would find the birthday prostitute thing the most concerning. However, Anthony throws both of us for a loop, and reveals that he has been in several high speed chases. And that they never caught him! He did this because his license was suspended. Well, that's awesome Anthony. However, Kim the Sex Auction Bait says she likes fast cars, and she accepts his baggage. How sweet, I guess.