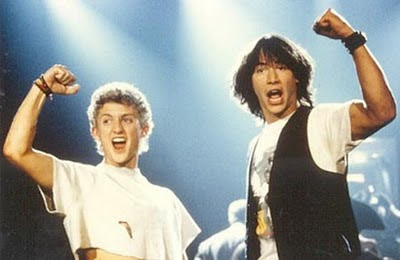 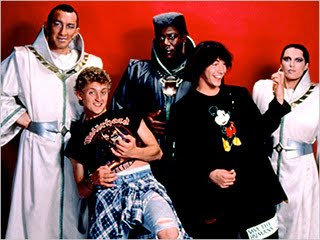 Welcome to another installment of Pitching Perfect Projects. In the past, I pitched completely made-up great ideas of mine, like Eating Dinner, Looking for Work, Black Ghostbusters, and Four Lesbians Two Babies and An Elephant. Well, imagine my excitement when I read (a month late) that a third Bill and Ted movie actually has the backing of Keanu Reeves and others!

Even more shockingly, while movie sequels way after the fact are normally derisively mocked on the Internet, all the comments on that story are pretty positive. I think it reflects the original movie series well. Although Excellent Adventure and Bogus Journey seemed like stoner movies, they were both really well-made. Heck, even Ebert gave Bogus Journey three stars in his review.

The question is, what do you do in the third movie? Here is my humble short list of ideas:

- A time wormhole that transports Bill and Ted from the 1990s to present day. There can be the obligatory "fish out of water" adapting that they have to do, like trying to get used to crap like Jersey Shore on television, and the whole concept of computers and the Internet. Their wives - the princesses - could also be a source of comic relief, as they presumably would be in their 30s now. And finally, the plot could hinge on the boys remembering that they had left money in a bank years ago, and now, the interest made them RICH. Or, something similarly cheesy.

- Bill and Ted get transported in the distant future, in order to see how it all ends. I envision something similar to a Hitchhiker's Guide To The Galaxy story, with plenty of loopy dialogue and side characters. (Mos Def, I like your music, but you really stunk as Ford Prefect.)

- The telephone booth can transport them to alternate dimensions, and they have to help additional Bills and Teds fix their respective life situations. This idea would be even better if they could also get Eddie Murphy to cameo as five different characters, although that might be far-fetched with the budget. 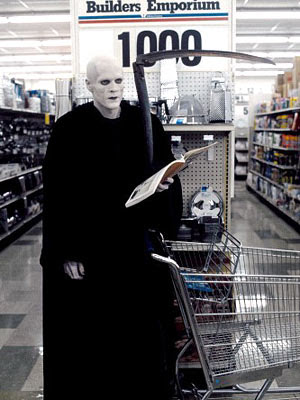 Regardless of which way they go with the new installment, I'd definitely like to see some characters come back. First off, Death needs to make an appearance. William Sadler, the actor that portrayed him, is still alive, and I'm sure he's up for the role. If not, then there are other guys who could fill in. You could even go meta and cast Norm MacDonald or Adam Carolla (or both!), two guys who have played Death on Family Guy.

One role that shouldn't be mentioned is Rufus, Bill and Ted's time traveling mentor. He was originally played by the deceased George Carlin, and you don't want anyone trying to fill his shoes. If you absolutely must have a time guide though, I think Kevin Smith in his Silent Bob persona would be a decent choice.