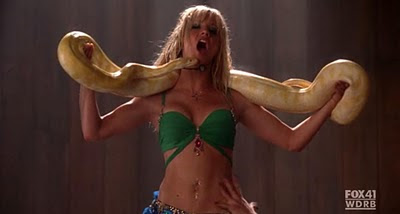 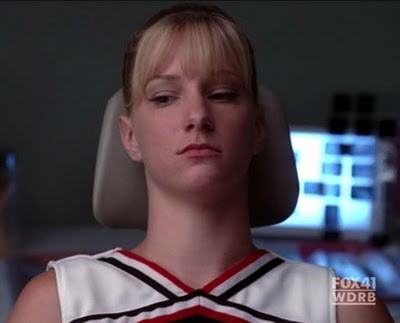 Please don't pull out all my teeth - When I smile, I'll look like an adult baby with boobs.

I've been waiting for a Brittany-centric episode for almost a year now, and wow, it didn't disappoint. She had lines in practically every scene she was in, and all of them were great, like the one above. She's hilarious! She needs more air time! 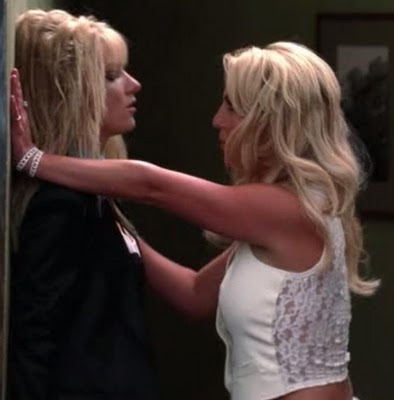 And obviously, from the photos, beyond being funny she is also... uh... a tremendous dancer. Obviously. Unlike some of the other past "theme" episodes Glee has done, I felt that they integrated the music in better, thanks to the dentist dream sequences. Spears also took part in the episode, but only two scenes, so it helped to establish that the episode had her "blessing," if you will.

One other random thought I had while watching about Brittany / Britney: She sure is tall. However, according to this site of celebrity heights, she's "only" 5'8". Maybe it's just that other people on the show are shorter? She's frequently seen next to Santana, who according to IMDB is three inches shorter, and Lea Michele (Rachel) is 5'2", and Dianna Agron (Quinn) is at 5'6".

However, on the negative side, I'll say that I am officially effed out on Will and Emma's thing. Whatever chance that had died to me when he showed up in that fancy car to impress her, and then his ex-wife got into a fight with him. (By the way, wtf? Where the heck did she come from?) Emma and Will getting back together just seems too implausible at this point, even for Glee. Please just give him a new girlfriend, creators. 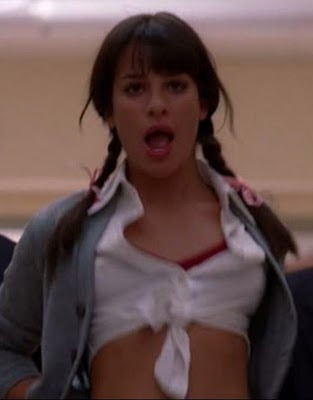 Likewise, I don't care much for even more Rachel and Finn drama (even if she was incredibly hot in this episode), or Artie trying to win back Tina, because hey, Artie WAS a huge jerk to her. And by all accounts on the show, Mike Chang is a good guy (who just happens to have perfect abs).

He's also another character that could use his own episode, as opposed to obsessing so much over the Will-Emma, Tina-Artie and Rachel-Finn pairings. I need to see more about Mike Chang, Puck, Kurt's awesome dad Mike O'Malley, Principal Figgins and a baby-less Quinn. Let's give the mainstays of the show a bit of a rest.
Posted by Steve G. at 9/29/2010 07:00:00 PM