Glee returns with a splendid episode. 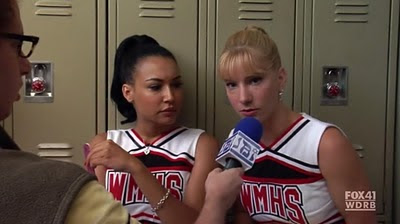 People thought I went on vacation, but actually,
I spent the summer lost in the sewers.
Ah - Loony quotes from Brittney signify the restart of Glee. I was worried that the show might jump the shark and go the way of Heroes, but the second season premiere brought the funny in all of the aspects involving the New Horizons kids.

The odd thing to me was where the episode fell flat - Will and Sue torturing the new football coach, and the adults in general. First off, it looks like the new football coach is just the old one in drag, which would be humorous to me, but I don't know if this is actually the case. Second, Sue just came off as mean-mean, as opposed to funny-mean, like she normally is with Will. She still had some great lines at least. And third, where the heck was Jayma Mays??? She was the most surprising absence, and I hope she hasn't been downgraded to just a guest star for the season.

However, every scene with the kids was great. (Although, I did question the "Santana has breast implants" thing, for the simple fact that her breasts did not look any bigger.) I loved that Quinn and Sue cut a deal for her to regain her status as the top cheerleader, and the scene with Brittney, Sue, the football coach and the doll were hilarious. (Also, Quinn once again looks stunning, which can't be underestimated in terms of keeping my attention on the television set. I am a boy, after all.)

I do kind of wonder where they go from here, of course. Are we going to have another season of Rachel desperately trying to protect her grasp as the top singer on the club? I realize she's the closest thing the show has to a "star" after Jane Lynch, but I feel her character is dangerously overexposed already. I'm still hopeful for some Britt and Santana-centric episodes, since that would really help break up the focus on the four "mains" of the cast - Rachel, Finn, Sue and Will.
Posted by Steve G. at 9/23/2010 08:00:00 PM