Steve Around The House - Cleo The Cat 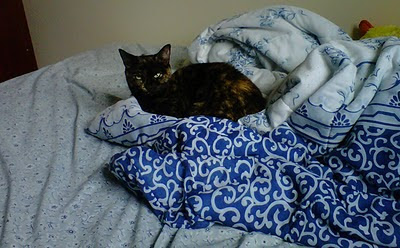 This is Cleo the Cat. In the past, I've blogged about Minnie, who I refer to somewhat derisively as The Kitten. This is because Minnie is still a kitten, and as such, she doesn't realize that it hurts when she bites me, and scratches at my ears and the back of my head.

(At least, I don't think she realizes... When I was playing Guitar Hero the other week, she did jump up at me and scratch hard enough to draw blood. I'm now worried that, like any B-movie, that she has acquired a taste for it and will be unable to stop attacking me as she gets older. Then again, The Kitten also tries to lick from pots of boiling water, so it's an open question how much longer she'll have all of her nine lives.)

Anyway, I don't talk much about Cleo because, well, she doesn't really do to warrant talking about. All she does is hide around the house, sleep in my bed, cuddle with me and get harassed by The Kitten. 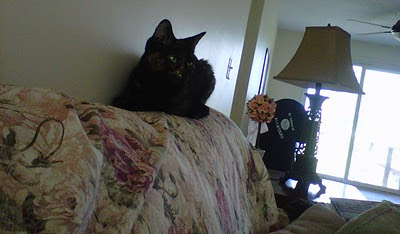 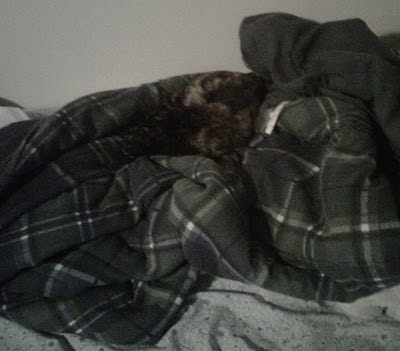 This and the first shot in the entry are the only two photos I have of Cleo that came out relatively OK. See, her fur is so dark that she blends into practically anything. In the picture to the right, she's actually in the middle of that quilt. But you can't see crap.

Because of this, Cleo basically hides wherever the eff she wants, whenever she wants. I've found her under my bed, under my roommate's bed, on the top shelf of our closets, behind my computer desk, under my covers, on every chair and windowsill in the house, and on my DVD shelf, which is also black. She uses this to her advantage in the middle of the night, as she sneaks on to my bed while I'm sleeping and curls up on me.

This camo serves her well against her biggest danger in this house - The Kitten. See, Cleo is de-clawed, but The Kitten isn't. Meaning, The Kitten will pounce on Cleo and cause her discomfort. (The Kitten finally caught on to the fact that Cleo doesn't have claws.) Also, Cleo is like seven or eight years old, and much like Danny Glover in Lethal Weapon, she's too old for that shit The Kitten is into. She has no interest in being chased at 2 a.m.

She does still love to attack spiders though. This is her greatest passion in life, even beyond sleeping, hiding, and falling asleep in her hiding spots. Once a night, she creeps into the living room and carefully watches the door to the cellar, where they climb up from. She stares at it intently, for hours sometimes, although sometimes The Kitten will chase her away. Finally, she pounces, kills and eats.
Posted by Steve G. at 9/19/2010 10:00:00 PM