Steve Around The House - A room finally clean (kind of). 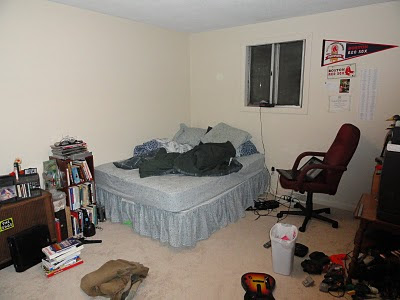 So, after actually living here more than a month, I've finally gotten rid of the moving boxes in my room (except for one) and gotten most everything on bookshelves and my desk. Want to see? Well, I know you did. (And besides, you don't really have much of a choice if you're reading this. I mean, I've already gotten your page hit - You don't mean much to me now. mwhahaha. Take that.)

Anyway, the above picture is of my bed. Nothing really that special. The sheets clash with my plaid quilt, but that quilt is so god damn comfortable that I'm never giving it up. It came with the "URI Starter Bed Kit!", for lack of a better term, but it's the greatest thing ever. Please also note all the pillows - I like options. Please don't note that the pillow cases are different colors, even though I have enough of both colors to just have one color on the bed. 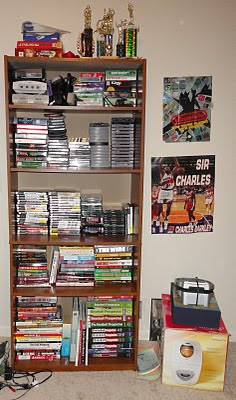 To the right, please note my wonderful bookcase. This is the one that I bitched complained about in the past, because it was such a chore to complete. However, it now holds all the trappings and distractions of a growing boy, such as myself.

The top shelf has a bunch of rec basketball trophies from when I was 10. I'm not sure if it's sad that I have them there, but they're nostalgia-inducing; it feels wrong to just throw them out. For now, please also note the old school "Now you're playing with power!" poster on the wall, and the (now) vintage Sir Charles poster under it. Under the Sir Charles poster is my breadmaker box, which is full of random cooking crap I haven't moved to the kitchen yet, and a George Foreman grill. 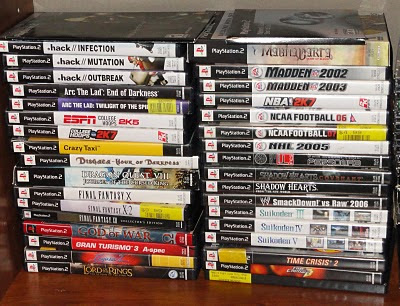 Taking a closer look at the shelves of the bookcase... To the right, gander upon a bunch of my (really geeky) Playstation 2 games. Sure, there is some legitimately cool stuff there, like the Time Crisis games. (And yeah, I have the gun to play them with; best $20 I ever spent!) But for every socially-passable game like Madden, there is something like Shadow Hearts or Magna Carte or the dot hack series to balance it out. 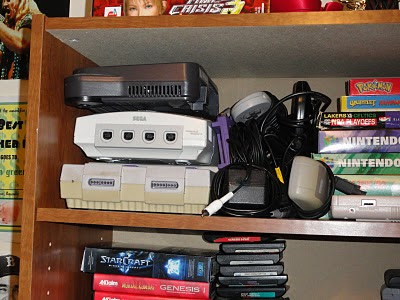 I also have a couple systems on the shelf, because there currently isn't room for them on my system switcher connected to my television. (We will get to that in a second.) Here, you can see my Nintendo 64, Dreamcast and Super Nintendo, along with a bunch of controllers and a SNES mouse next to them, and various game boxes next to them. I have no idea I had this much accessory crap, to be honest. Go me? Almost all of it was scooped up when various Gamestops and Funcolands were trying to clear inventory.

However, none of this is as sad as the fate of one of my systems... 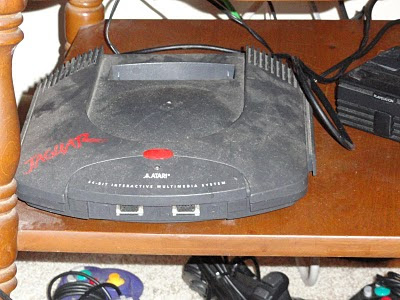 Yes, that is a thick layer of dust you see on my Atari Jaguar. Yes, the system really does suck as much as the Angry Video Game Nerd says it does. The best part of the system? The comical "Rawr!" it makes when you turn it on. I have a couple games, but most of them are just bad ports with better versions on other systems, like DOOM.

The lone exception is Attack of the Mutant Penguins, which is a quirky if not exactly fun game. The title really sells the game, and it's one of the few Jaguar games actually worth playing. I have the box and manual for it too, so it's one of the few semi-rare things I have. Moving on... 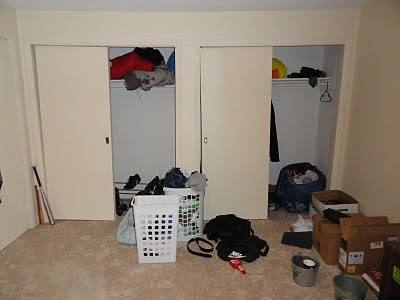 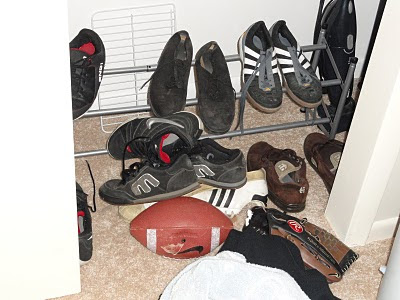 This is my closet. Yeah, it is full-length, and takes up the entire wall. For me, it is mostly full of junk, my old desktop computer and monitor, my winter clothes, and the few shirts I have to hang up. There are a few goodies hidden inside though, like my shoes and sports stuff [right] and a NES Power Pad on my top shelf, underneath some duck-design pillows my little sister made for me.

Some random things to round out the room... 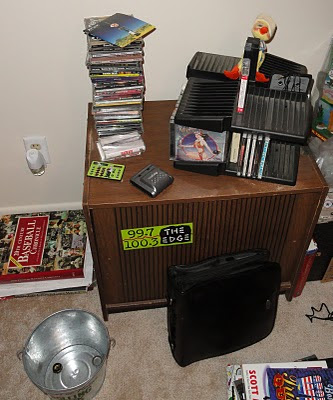 - My CD rack is missing a bunch of CDs. See that big stack to the left of it? Those are all cases with missing CDs. The duck on top of the rack was supposed to be guarding them, but obviously, he isn't doing a very good job.

I also somehow have three copies of Ill Communications by The Beastie Boys, and two copies each of Dookie and Insomniac by Green Day. I'm not really sure how this happened, since I don't recall buying multiple copies of any of them. Unfortunately though, they're all so badly scratched that I don't feel comfortable selling them on eBay. 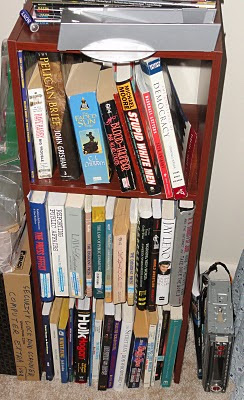 - This is a secondary bookshelf for me. It's at the foot of my bed. I mostly just use it for any book or product I've put on Half.com or eBay. As you can tell, people aren't exactly jumping at the bit to purchase The Foundations of American Democracy, which was out of date when it was my college text book in the fall of 2002. Hey, it's only 99 cents! Help a brother out. 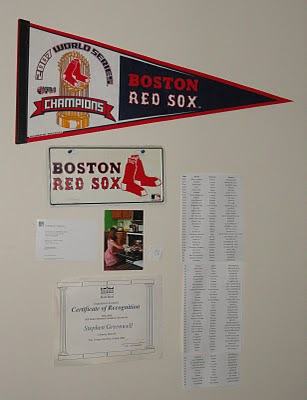 - And finally... The top is a pennant from the Red Sox 2007 World Series championship. Below it is a Red Sox license plate thing my grandfather gave to me when I was a kid. To the right of that is a printed list of every the nicknames for every Rhode Island high school sports team. And to the left of that is Danielle Membrino's postcard advertising her art exhibit.
Posted by Steve G. at 9/21/2010 07:00:00 PM