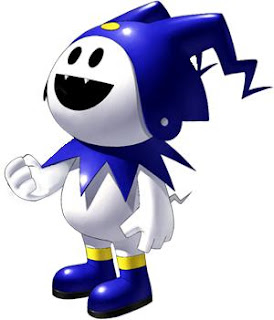 For whatever reason, I continually forget the name of Shin Megami Tensei: Devil Survivor 2. In my browsing history are searches for Devil Summoner 2, Demon Summoner 2 and Demon Survivor 2. This is despite the fact that I beat and enjoyed the first installment of the series, and I've played pretty much every other Persona / SMT game. Maybe that's what is causing the confusion - All those games just blurring together in my head, man.

Anyway. Devil Survivor 2 is basically the first game with a new story. The action is still tactical RPG, kind of like Final Fantasy Tactics minus jobs, to make an odd comparison. You get up to four leaders in fights, with each leader controlling two demons, making a primary controllable force of 12. Combat is turn-based, with positioning and movement on a map beforehand mattering quite a bit.

Like a lot of the Persona games, you primarily make your demons more powerful by combining them with other demons. The only slightly annoying thing about this - The power of demons just seem to be influenced by their level and their base level, and not just their strength or magic statistic. This can make it a bit tough to decide what demons to keep and what demons to use for merging.

Well, until the end of the game, that is. By the seventh day (think chapter; one day is one part of the game), pretty much everything can waste your party unless you have proper protection. By this, I mean the proper damage reduction skills - Some let you reflect or absorb enemy actions, even physical attacks. The last couple of boss fights are definitely white-knuckle though.

Like every other Persona game, a good portion of it is spent building relationships and trust up with the other characters. This aspect of the game is done pretty well, and unlike past games, thankfully you only have to earn four levels of trust with people, as opposed to 10. There also wasn't a horrible clunker of a plot in these, which was nice - Persona 3 and Persona 4 both had characters that I wish I could ditch and still get the good ending.

So anyway, final judgement - This is a pretty swell game, if you like your DS and you like your tactical RPGs. I scooped up for $25 on GameFly. (Random note on GameFly: If you have a membership, you can now play a bunch of PC games for free. I lost a weekend of my life to Civilization 4 as a result.)