Excuse Me While I Talk About Wrestling

My one vice, even more so than listening to Lisa Loeb, remains professional wrestling. Yes, I still watch Raw every Monday night, and I’ll even tune in to TNA Impact if I feel like hurting my brain, and if something better (Archer, Always Sunny, most of NBC’s Thursday night lineup) isn’t on.

And my favorite pro wrestling event each year is always the Royal Rumble, and the rumble match itself. For those of you uninterested in pro wrestling, let me go on in GREAT detail about this!

The rumble match itself consists of 30 superstars fight in an over-the-top battle royal for a title shot at Wrestlemania. Two superstars start off, one-on-one, and every 90 to 120 seconds (it varies depending on the year), a new wrestler is thrown into the mix.

Basically, the match serves as a sort of poo-poo platter of wrestling. Most everyone in the match gets a chance to get some offense in, and because there are 29 eliminations, you get plenty of drama and storylines created and furthered by what happens in the rumble. 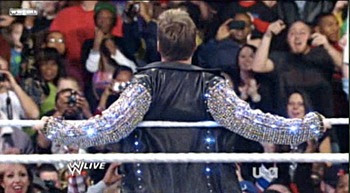 Today’s match, on paper, figures to be a bit ho-hum. My favorite wrestler, Chris Jericho, just returned to action this month, and the rumble will be his first actual match back. ([Right] Him in his over-the-top, fan pleasing persona right now.) He’s one of the favorites to win because he’s one of the few major WWE wrestlers lacking a regular feud right this second. Meaning, him winning would automatically propel him into a major angle / storyline.

For whatever reason, the best rumble of all-time, the 1992 edition, is available on YouTube in its entirety. Yes, it is totally 1990s wrestling, but if you like wrestling at all then you should be a big fan of the action. Plus, it has Bobby Heenan at his peak on the microphone! And Ric Flair! (If you want some awesomeness from both, skip ahead to about 9:15 in the match for his entrance, and 33:30 for the introduction of Roddy Piper.)