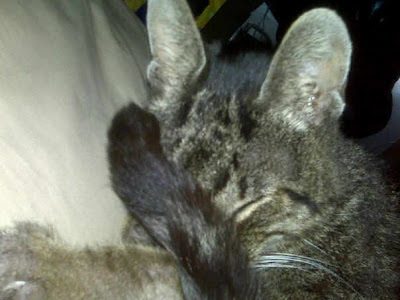 [Right] Averting my eyes from the Always Tragic human condition.

“There is no greater sorrow than to recall happiness in times of misery.”

Filthy Humans, I have recently stumbled upon Programming that I find most illuminating when it comes to explaining your Brutish Psyche. My Current Owner often leaves Me alone for the day – as he should – and I thus have ample opportunity to sample what passes as “Culture” from your Disgusting Brood.

Frankly, the Beasts on this Dance Moms programme intrigues.

At first, my Superior mind boggled at the behavior of the Lummoxes toward their Spawn. Were their vocal chords insufficient to scream and abuse their own children? Why did they feel the need to sublet the Duty to an even larger Lummox?

While these methods of the Lummoxes are Crude and Undignified, I am always in Favor of the Strong preying upon the Weak.

When I was but a Kitten, I was quickly weaned off my mother’s Teat, and these Human Spawns seem to be of at least five or six years. Why, that’s a perfectly appropriate age for them to be foraging amongst the Streets, using their charm to receive free Italian dinners from bistros and to befriend alley cats.

Likewise, the Lummoxes seem uninterested with their Spawn, except when the Spawn can bring baubles of distinction back. Being of Superior Feline stock, my Mother was satisfied with Rodentia and Squirrel pelts, but the Lummoxes instead seem to covet the folly Human materials of gold and silver.

As Crafty as the Lummoxes might think Themselves, I feel that their plan will eventually backfire. For Starters, I find them to be adding too much Fat Girth Mass, as opposed to the lean, supple Mass of a majestic Superior Being. For each pound I gain, an equivalent Human Muscle would be 20 pounds.

Secondly, their Spawns will not always be Spawns. I remember even a brief period of Rebellion against my Mother, and she was quite stern but Fair with a Dignified Being such as myself. With their increased Girth, the Lummoxes will not be able to defend themselves from their more nimble Spawn, much like how the Simians of Congo rose up against the Filthy Diamond-Stealing Humans.