In my continued culinary experimentation, I made a discovery the other week – Ground meat is almost always cheaper than the full or partial cuts.

As a result, I picked up two pounds of ground beef, a pound of ground pork and a pound of ground veal. I mixed up a pound of the beef, the pork and the veal with some salt, pepper and garlic, and I’ll be making burgers with that tonight, once I get home from Brewed Awakenings and some other stops.

However, I used the leftover pound of beef Saturday night for burgers. To prep them, I let them marinate in some lime and chipotle mix overnight, which was probably a mistake – the meat got a bit too soggy, and as a result, I think the patties had problems problem holding together. 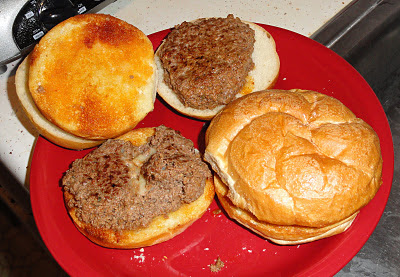 Above is an overview of the finished product. I also took the time to toast the buns, but in reflection, this was probably unnecessary. They were Kaiser rolls, so they took a while to toast, and I think they mostly just absorbed the butter taste. Next time, I’ll probably just stick to regular hamburger buns if I’m going to toast something.

I did make one great decision with the meal. See that in the middle? Let’s zoom in a bit: 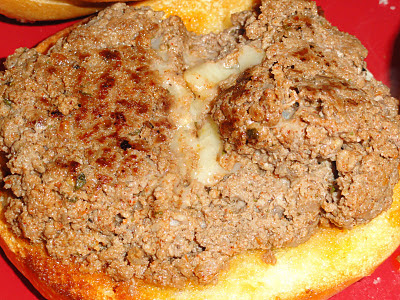 mmm, That’s Vermont cheddar cheese. I made a very simple stuffed burger, basically splitting the patty into two, inserting a slice of cheese, and then sealing it back up. This was a great success, and I think it would work better next time with some flavored cheese, like jalapeno, as opposed to flavoring the meat, which makes it too soggy.
Posted by Steve G. at 1/22/2012 08:00:00 PM