This Picture Sums Up Why The Match Game Is Still Awesome 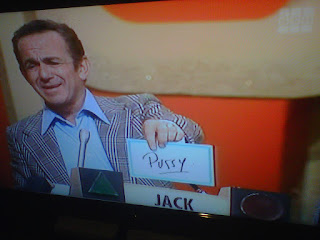 Because, you see, comedy runs in circles to an extent. However, some things are always funny, whether you watch them in 1972 or 2012.

I have my DVR setup to record every episode of The Match Game for instances like this. I'm not even sure who that celebrity is - I could have sworn they said it was Jack Palance, but I can't find any reference to him being on the show. It could also be Jack Klugman, the husband of regular panelist Brett Somers.

The show combined several elements key to comedy. Let me provide a theorem or equation (proofs were never my strong point): Lots of alcohol + corny host (Gene Rayburn) + over the top "flowery" man that isn't gay because this is 1970 (Charles Nelson Reilly) + actually funny female comedian (Betty White or Fannie Flagg) + bimbo interaction (Dick Dawson hitting on the Hottie of the Day to his left, like Adrienne Barbeau) = comedy perfection.

Every couple of years, they try to revive The Match Game, but the mix is always wrong. For one thing, they tend to favor names over people that are just kind of funny. A proper version of the show wouldn't really have that many big names; the names would become bigger because the people would establish themselves with outlandish behavior on the show. 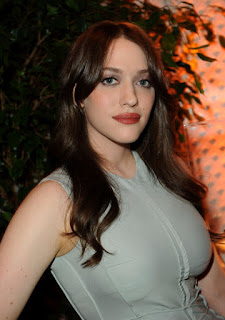 My cast pitch: Dave Dameshek (bombastic and little-known radio guy), Betty White (old standby, seemingly does not turn down a paycheck), Kat Dennings or Kristen Bell (always funny on late night shows, probably wouldn't mind slumming it), and Patrick Warburton (great voice, doesn't seem to turn down a paycheck). That gives you four stable people, plus two spots to rotate, maybe three, since I imagine Dennings/Bell would be off quite a bit for other things. I would also love to have Norm MacDonald on as much as possible, but hey, that is true for any show on television.

That cast would never, ever happen, I know, because TV executives would probably want to cast it with retreads. ("This is going to be that big comeback vehicle for Fran Drescher, trust me baby!") However, including Kat Dennings in the previous paragraph gives me an excuse to run a photo of her, which is always good times.