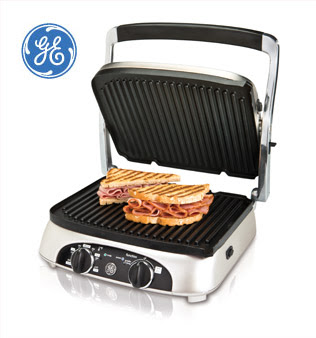 So I've finally decided to start cooking at my house again. It's a bit of a chore, since I have a very tiny kitchen, and I don't really like using my oven – It's very close to the wall, so I don't have room to stand in front of it when the door is open. Plus, it is one of those ovens with a pilot light, and it's from roughly 1923.

Because of all of the preceding factors, I finally bought the bullet and got a Foreman grill. Well, to be more precise, I got a fancier, nicer version of a Foreman grill, a clone made by General Electric. You can see a picture of it to the right. Unlike the old Foremans, this has removable plates, which makes the clean-up about a million times easier. It would be about a billion times easier, actually, but I don't have a dishwasher at this place. (This also factors into my laziness when it comes to cooking.)

I got it on Friday night, so I tested it out Saturday after a thorough washing. It actually cooks pretty well! I had a thick cut of London broil, plus another smaller cut that I fileted. While it did really well with the fileted cut, it still did a passable job on the thicker cut. With the older Foreman, it would normally just char and burn the top and bottom layers, and leave the middle uncooked. Not so with this grill. 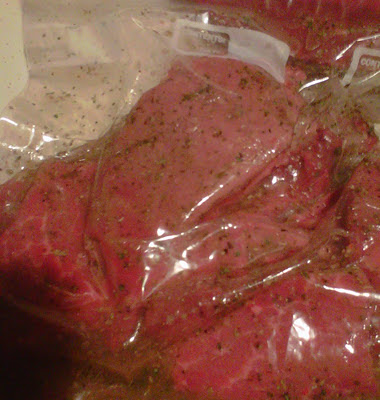 To the right is my dinner for Sunday night. In lieu of buying a bunch of BBQ and liquid marinades, I rely more on flavor packets, since they just require vegetable oil and vinegar. Saturday's delicious steak dinner was peppercorn, and Sunday is baja citrus. I think that implies a mix of tang and sweet, but the flavor is always somewhat ambiguous until it is cooked into the meat.

Normally, I wouldn't make steak two nights in a row. Unfortunately, I took advantage of a 2-for-1 sale on the steaks, and I didn't notice that the expiration date for them both was Sunday. Thus I find myself in my current dilemma, overdosing on steak.