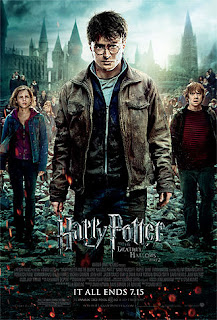 Continuing my tour of Harry Potter movies way after the fact… If you missed the first couple posts, movies 1 to 4 are here, and Order of the Phoenix is here. My Half-Blood Prince review is here. And of course, SPOILERS abound!

A better title for the final two movies would have been Harry Potter and Everyone Else Dies. However, I admit that that probably would have taken some suspense out of the book and movies…

For the most part, the deaths occur to secondary characters. Your main characters – Harry, Ron, Hermione – are all alive at the end. (Fun fact: “Hermione” is in the Word dictionary.) Snape is probably the most significant secondary character to die, and while he plays a big role in the plot of the movies, his actual screen time is somewhat small. Most of the Order of the Phoenix is done by the end, as are some side characters we like, but that aren’t completely integral to the plot.

If I had to levy a complaint against the series as a whole, it is that they don’t do enough to let some of the secondary characters have more of the spotlight. Snape, Ginny, Luna Lovegood, Neville and Hagrid are all more interesting at various points than the leads, and it would have been nice to see what they were up to during some slower moments. Instead, especially in part one, we get Angry Ron and the Harry Potter series doing a meek imitation of Lord of the Rings. I kept waiting for Ron to talk about his precious when they discovered him wearing the horcrux around his neck. (Note: Horcrux is not in the Word dictionary. I also can’t pronounce it, which is a delight to Karen, who I’m watching these movies with.)

On Facebook, friends have told me repeatedly that the side characters are expanded upon more in the books. That’s fine, except that it’s not in the movie series, which is what I’m watching. I’m just evaluating the movie series on its entertainment value. For comparison’s sake, The Lord of the Rings trilogy does a much better job when it comes to its focus on side characters, when it comes to which to include and which not to. (Well, except for the exclusion of Tom Bombadil, and let’s not get started on what The Hobbit became.)

The somewhat maddening thing is that some of what’s on the cutting room floor should have definitely been included in the movies. On the special features for Deathly Hallows Part One, there are a couple good deleted scenes with Harry and his aunt, and Dudley. These would have been way better in the movie, instead of the weird, forlorn montage we get at the beginning of the movie.

The final four movies were all directed by David Yates, and while they were serviceable, they didn’t come close to matching what Cuaron did with (arguably) worse material. The last two movies especially have a slew of character deaths that, I assume, mostly do occur in the books, along with the finding of relics and other treasure. Instead of a good focus on this, we get lots and lots and lots of shots of teenagers brooding. Yay.

Other stray thoughts about the series:

- My final rankings: Prisoner, big gap, Deathly Hallows 2, gap, Half-Blood Prince, Order of the Phoenix, Deathly Hallows 1, gap, Sorcerer’s Stone, Chamber of Secrets, gap, Goblet of Fire. I find Deathly Hallows Part One to mostly be a “just you wait!” movie; it’s a 120-minute preview for the next movie. Deathly Hallows Part Two does deliver on the plot threads built up in the series though, and features plenty of neat callbacks to the previous movies, so it’s ultimately my second favorite of the series.

- It was cool to see Neville get a Big Damn Hero moment in the final film. At first, it seemed like it was just a tease, as he was initially turned away by Voldemort. So it was genuinely surprising to me that he got to be the hero at the end, and it’s a good payoff to him being the Butt Monkey of the series along with Ron. (He at least gets to make out with Emma Watson.)

- Bonnie Wright, a.k.a. Ginny, is consistently taller than Harry in the movies, which I find amusing for some reason. Google says she’s only 5’6”, so Daniel Radcliffe is a spry little fellow.

- Draco ultimately turns out to be the biggest wet blanket of the series, and also what I found to be the most “roll your eyes” plot contrivance. It’s a pretty flimsy technicality that he is the actual master of the Elder Wand because he disarmed Dumbledore, instead of Snape, who killed him.

- The one editing moment I really liked in the final film was having the “death” of Harry happen relatively early. Meaning, not in the film’s final 10 minutes. It left a decent amount of time for the Siege at Hogwarts, where we finally got to see McGonagall and others use their full powers, and the cute epilogue.

- During said epilogue, for a moment I thought, “Aw, wouldn’t it be cute if Harry’s boy ended up marrying Ron and Emma’s girl!” Then, I remembered the bloodlines involved. Whoops. My bad. Maybe Luna and Neville have some kids that they can involve in this, plus, Draco and Random Woman seemed to be in the final Hogwarts train session as well.

- Now that I’m done with the Harry Potter series, the next one on our list is Star Wars, which Karen hasn’t seen / doesn’t remember seeing. Note: We will only be watching 4, 5, 6 and 7. When it comes to media I’m watching on my own and will probably write about at some point, the current list is Restaurant Startup, Star Trek: Voyager and The Next Generation, Gotham, Heroes: Reborn, Last Week Tonight and The Late Show With Stephen Colbert. If you want my take on any of them before the others, let me know!
Posted by Steve G. at 3/01/2016 06:15:00 PM