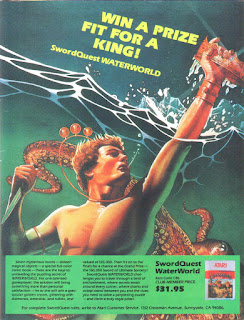 - Cyan, the makers of Myst, have released a teaser trailer for their new game, Obduction. Check it out on their YouTube channel.
- There are a bunch of new screenshots and tracks released for the new Toejam and Earl game, per TechnoBuffalo.
- Amazingly, you can still play Phantasy Star Online on the Dreamcast! Well, if you’re willing to buy some modded games and/or systems. But, hundreds of people still do, and Jason Evangelho has the details on Forbes.
- Atlas Obscura’s Eric Grundhauser has an awesome read on the “treasures” offered in an old Atari contest for Swordquest. It’s long, but good. (For some of the neat-looking ads, including the one on this entry, go here!)
- Today’s “Shut up and take my money!” moment: Nintendo plans to open up a theme park at Universal Studios Japan. The Telegraph in the U.K. has a good write-up here.
- Bryan Cranston has been in a lot of commercials, including one for the Atari 2600 game MegaForce. Zap2It has a listicle here.
- From Allegra Frank at Polygon, and a bunch of other sites, the Coleco Chameleon is now dead.
- Per some mod makers, Microsoft wanted $500,000 to license Shadowrun for an X-Com 2 mod. Niche Gamer’s Carl Batchelor has a summary of the Twitter stuff here.
- On Kotaku Australia, Jason Schreier has a 20-year retrospective on Super Mario RPG.
- From The Wrap and a bunch of other sites, DuckTales is getting a revival! The first image is out, and it doesn’t look bad. Hopefully, it will lead to more splendid video games to review…
- Are you going to SXSW? (Sweet baby boy Huell is!) Well, they’re having a bunch of video game and tech-focused panels! Check out the list here.
- In re-releasing news, the rumored Valkyria Chronicles Remastered is now a reality for North American audiences! Per Sega and Sony, it’ll come out May 17, and feature upgraded graphics and full trophy support.

ON THIS DAY IN VIDEO GAME HISTORY…
- On March 11, Mega Man & Bass came out for the Game Boy Advance in 2003, which is close enough for our purposes. It was the only main series game for the GBA, and was generally well-received.
- PlatinumGames’ MadWorld, an incredibly ultraviolent game, somehow came out for the Wii in 2009. It’s one of the few Wii games that is not kid or family-appropriate, as it is about a murder-related game show. Think of Smash TV, but gorier, and more of a beat-em-up.

Video game history information comes from GameFAQs and Moby Games. And as always, if you’d like to support the show, do so via our Amazon link.
Posted by Steve G. at 3/10/2016 10:40:00 AM