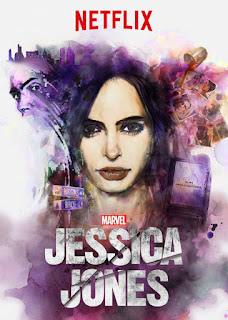 Note: Season one spoilers for Jessica Jones follow. It’s been on Netflix for a couple months though, so I imagine I’m one of the last people to see it anyway…

One of the issues with Netflix being a provider of shows now is that they don’t air commercials. Now, commercials are usually just kind of annoying, but I must admit that after binging on Jessica Jones and the second season of Daredevil this past weekend, it’s nice to have a few minutes to catch my breath and to decompress.

I think the problem is more pronounced with Jessica Jones, which is a bit slower paced and drawn out as compared to conventional network shows and even Daredevil. The noir, detective elements of the show are cool, but I don’t feel like they’re utilized as well as they could be. This is a show that really could have used some lighter, “mystery of the week” episodes, a la The X-Files, as a bit of a break-up from the dark, season-long arc of Jessica’s pursuit of Kilgrave.

However, I’m being a bit needlessly negative at the start here! Overall, I thought Jessica Jones was a continuation of the fine foundation set by the first season of Daredevil. You don’t have to watch one to appreciate the other, but they both have the same sort of tone to them. They feel like well-planned, developed projects, as opposed to the ultra-aggressive (and seemingly stupid) D.C. movies.

While Ritter does solid work as the title character, I thought she was more of a B, B+ in the role. It’s tough, because I’ve seen Don’t Trust The B****, probably one of the five people in the world who has. That show remains one of my favorites, and features Ritter at her snarkiest, so Jessica Jones just seems like a more badass, less humorous version of The Bitch in Apartment 23.

Fortunately for the show, every other actor is on-point, especially David Tennant as Kilgrave, the mind-controlling master villain. I was at a bar last week and my buddy Matt essentially called him the creepiest motherfucker ever, and that’s a pretty apt description. He is manipulative, disgusting and evil, but because it’s Tennant, there is also a carelessness and frivolity to his actions that somehow make them worse. (Side note: Don’t look up comic book panels with Purple Man, the character he’s based on, unless you’re looking for nightmare fuel.)

The two besties of Jessica Jones are Luke Cage (Mike Colter) and Trish Walker (Rachael Taylor), who work well when paired with Jessica because they’re seemingly functional human beings. Yes, they have some demons, but both are able to work normally, and as a result, deal better with Jessica’s shit. Luke Cage already has a spin-off, set to debut in September, and the trailer is friggin’ awesome. And slight future spoiler – Trish is a superhero in the comics, and it wouldn’t surprise me if they go that way with future seasons, since Taylor and Ritter have great chemistry with one another.

Once you get past the four leads, you get to dicey side characters. Will Simpson, Hope Shlottman, Jeri Hogarth, Malcolm and Pam all have moments, but they all have farcical scenes as well. (Okay, Pam, not so much, but wow, those dresses she stole off the curtain rods left little to the imagination.) The melodrama between Jeri, Pam and Jeri’s ex seemed especially drawn out and forced, and there were probably better ways to establish Jeri’s ruthless nature.

Again though – minor complaints. Tennant’s performance alone is reason to binge the ole Jessica Jones. It’s on Netflix, probably until the end of time, so there’s no rush at this point. (And in the next few weeks, I’ll also have some reviews of Daredevil’s second season, and Gotham.)
Posted by Steve G. at 3/30/2016 09:00:00 AM