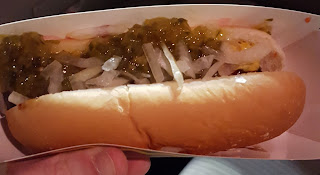 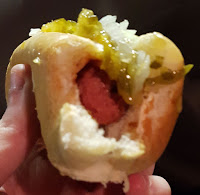 Debuting a new, semi-regular feature! I tryout questionable fast food items so that you don’t have to in… Steveats. (Note: Title developed in about 10 seconds of brainstorming.)

Burger King seems to have hit a bit of a rough patch lately. At least according to the always reliable Wikipedia, it has fallen to third in the fast food burger race behind McDonald’s and Wendy’s, and it delisted itself from stock exchanges in order to improve its financial footing. The one closest to me in Rhode Island seemingly hasn’t been upgraded since the mid-1990s, and a nearby 24-hour McDonald’s basically gets all of the fast food business in town.

To combat against the two chains in front of it, Burger King has turned to what I call Batshit Insane Product Offerings. While they hit gold every once in a while – avocado burger, mmm – their offerings usually prompt more of a “Why?” from me. Lately, their big products have been the extra-long cheeseburger, chicken and crinkle cut fries, and the focus of today’s entry… A hot dog.

The Burger King hot dog tastes like more of a hot / system wiener though, as opposed to a classic “boil in water” or throw on the grill dog. It’s strange, since their burgers are advertised as flame-broiled, so you’d think that there would be more of an emphasis on a grilled taste. Nope! It’s more of a long-steamed taste that I’ve always associated with wieners, not classic hot dogs.

What they call the “classic grilled dog” comes with ketchup, mustard, chopped onion and relish, on a bun. It’s about $1.49, and it’s just OK. Oddly, the meal deal is just one hot dog, fries and a drink for $4.75ish, which I find bizarre because I’ve wanted just one hot dog ever in my life. Offer two of them bad boys, BK! There is also a chili cheese grilled dog, which is a hot dog topped with “warm chili” and cheddar cheese. “Warm chili” sounds disgustingly vague to me.

The bigger issue though is that the BK hot dog is in that weird middle ground. It’s not as cheap as wieners from a decent place or even the gas store, and while those dogs seem disgusting, I mean, they’re hot dogs. They’re the same pretty much everywhere, and you can get two for the price of BK’s one at Cumberland Farms or 7-Eleven. (Plus, if you truly want “bang for your buck,” obviously the grocery store’s packaged dogs and deli hot dogs are both cheaper.) And if you’re going to go for a “gourmet” hot dog, just shell out the cash for one of them fancy ones at a proper restaurant or takeout place. In Rhode Island, Five Guys and Spike’s are both superior.