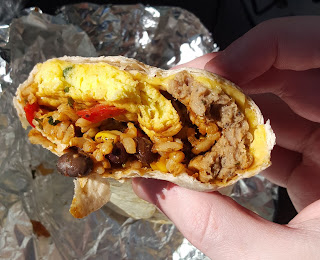 Debuting a new, semi-regular feature! I tryout questionable fast food items so that you don’t have to in… Steveats. (Note: Title developed in about 10 seconds of brainstorming.)

Dunkin’ Donuts is seemingly going through an identity crisis. They’re not content with just being the OK quick option for hot and iced coffee, and fatty confectionaries, and super fatty frozen drinks, that we want them to be. Instead in recent years, they’ve come out with a slew of other, odd options, like deli sandwiches on toasted, overly-buttery bread, and hash browns, and knockoff cronuts.

Their latest thing is a burrito supreme, and surprisingly, it’s not bad! Well, except that it has an incredibly stupid name – The GranDDe Burrito. I tried one with sausage, and while it was clearly microwaved, it was spicy and filling. It’s got a bunch of rice, some roasted red pepper and the meat of your choice, and it’s reasonably priced at $3.99. At least at my local Dunkin’ Donuts, they let me add hash browns for 79 cents, and those weren’t bad either.

Caution though – They definitely microwave the hell out of them. I left mine out of the wrapped in my car for about 20 minutes, and it was still hot, not even warm, to bite into. Like the ole Omwich sandwiches Dunkin’ used to offer, it’s a dish you need to wait a good, long time to cool  down properly, or you just have to aggressively cool it down. Also, by the way, it’s 710 calories according to the DD website, which means it’s probably actually more. 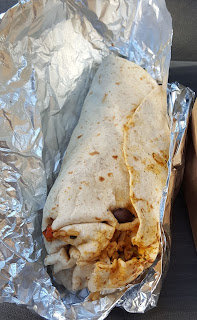 While the burrito itself is delicious, it continues the distressing trend of Dunkin’ Donuts needlessly rearranging their menu. They’ve added the burrito, but they’ve taken away the classic #1 combo of two donuts and a coffee. Outrage! Part of the appeal of the store is that they have the cheap combos. I don’t really want to get microwaved sandwiches from Dunkin’ Donuts unless they’re really cheap, because I could just get an actual decent sandwich or burrito from pretty much any fast casual place for an extra couple bucks. Dunkin’ Donuts, why can’t you just be happy being Dunkin’ Donuts? You were created by Fred the Baker, after all, not Fred the Sandwich Maker.

(Side note for South County, Rhode Island people only – Bess Eaton is still open on Kingstown Road near Dale Carlia, and they absolutely still have the #1 combo. So lately, they’ve been getting my donut and iced coffee money. They also still have THE TANK, of course.)
Posted by Steve G. at 3/22/2016 02:50:00 PM