Today’s Steveats is done at the request of my pal Fatts, and it’s probably not a coincidence that my girlfriend is currently spending a week in Iceland. Eating a bacon-crust pizza from Little Caesars by yourself is pretty much the embodiment of sadness. The only thing I was missing was a big Mountain Dew from 7-Eleven to wash it down with, followed by devouring a pint of Ben & Jerry’s.

But I digress. If you like salt, bacon, salted bacon, salted tomato sauce and a cheese product with salt, then you’re in luck! The Little Caesars “Bacon Wrapped Crust Deep Deep Dish,” as they call it, is the perfect product for you. As the advertising and my posted pictures suggest, the pizza is literally just bacon strips wrapped around the edge of one of their conventional pizzas. While they suggest that this is a “deep deep dish,” I didn’t think it was any deeper than their normal pizza, or something from Pizza Hut. (By the way, I agree with Jon Stewart. I find deep dish delicious, but it isn’t a pizza.)

However, guys, gals… Is this a safe place? Can I confess something? … I kind of like some cheap chain pizza from time to time. Now, I’m not saying that I would eeevvverrrr opt for Domino’s, Pizza Hut or Little Caesars over a proper, good pizza. To me though, there is a hierarchy of pizza, and it goes something like this:

As someone who survived his tween and teen years on a heavy diet of Friday pizza days at school and Mama Celeste frozen pizzas, pretty much any chain pizza place is still delicious to me. Plus, it’s cheap. Sometimes, I just wanna get four medium pizzas for $20, or to visit the Pizza Hut buffet to stuff myself full of a disgusting amount of disgusting pizza. (I think the young Hollywood actress dating Jon Lovitz has a form of this going on as well, although in a different way. Well, excited that that was a faked publicity stunt.) 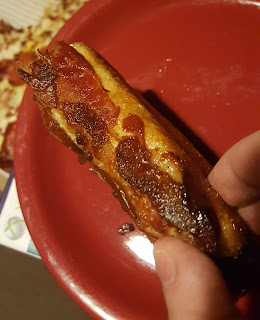 Anyway though, when it comes to Little Caesars specifically, there are only about five stores in all of Rhode Island, so it’s not part of my regular rotation. I did really like the ads as a kid, and the Crazy Bread. (I doubled down and got some of that with my pizza, and it was salty and breaded and OK.) It might be because I didn’t have one near me growing up, but I generally prefer Little Caesars over Pizza Hut and Dominos, in that order. I’m a big fan of square-cut slices though. (Unranked: Papa John’s and Cici’s, which we didn’t have.) However, there isn’t a whole lot of difference between them to my taste buds – Just a ton of salt, jar sauce, fats and sugars. They’ll do in a pinch, but I’m always picking a better option if I’m eating with other human beings.