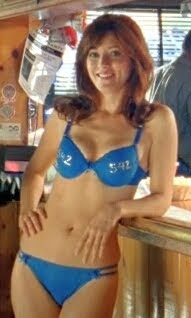 [Left] I could have used Elizabeth Bogush, the redhead from the KGB commercials, last night. Then again, who couldn't? Thanks to AdRants for the photo.

First, as a procedural note, sorry about the late posting of this entry. Unfortunately, I went non-stop from about 9 a.m. Thursday to 4 a.m. Friday, between work and the trivia finals at Casey's (more on that later). I slept in until about noon today, but because of that, I was working from 1 p.m. to just now. Whew!

Anyway, to reference the title first: Can anyone recommend a good laptop for me to buy? Money is a priority, so the cheaper the better, but things like bundled software don't matter as much to me. The only real requirement would be a big hard drive - I'm a pack rat when it comes to files, and I'd want something at least as big as my current desktop hard drive, which is 120 gig. Hopefully, I'd also use this laptop to get rid of my desktop. And I don't want an Apple / Mac.

As for why I need a new laptop, time to get on to the personal stuff. My laptop overheated and the battery is completely shot, probably because the fans don't work properly. It's about five years old and kind of beat up at this point, so it would probably be better to replace it now as opposed to trying another band-aid fix.

On top of the laptop breaking, my team came in second at the Casey's trivia finals last night. That sounds pretty good, except that we lost out on first place by ONE POINT! Ugh. What gives??? The sad thing is that there were several questions - What was actor Fred Thompson's character name on Law and Order, what character danced while he sliced an ear off in Reservoir Dogs - that I should have gotten. So frustrating to be so close to winning, only to have it "yoinked!" from us.
Posted by Steve G. at 8/28/2009 07:17:00 PM