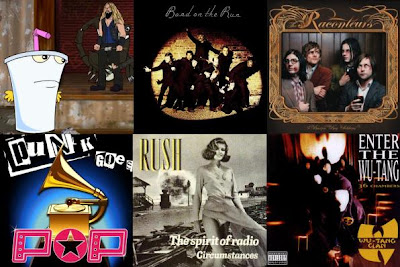 Just doing a normal edition this week. I will probably do a theme next week; feel free to offer some suggestions, if you'd like.

- “Spirit of Radio” by Rush. I have hyped them up a bit in past running diaries, but hey, it's not like they got any less awesome. If you like this weird, 1970s to 1980s sort of progressive slash electric rock, then Rush is at the top of the heap musically. They actually have multiple hits with some different sounds - “Closer to the Heart” and “Tom Sawyer” and “The Trees” - as opposed to a band like Frankie Goes To Hollywood.

More importantly, I know that Geddy Lee is in Rush, but only because of Aqua Teen Hunger Force. In one episode, “Spirit Journey Formation Anniversary,” Shake pays Geddy and heavy metal guitarist Zakk Wylde to do a brand new version of the birthday song. Not surprisingly, since Shake is the producer, they create a horrible spectacle.

While Wylde clearly plays himself in the episode, I'm not sure if Geddy Lee's lyrics are real. His presence is mostly alluded to, as opposed to guaranteed. However, if you're ever arguing with friends that ATHF is solely stoner comedy, then bring up this episode as a rebuttal. As far as Aqua Teen episodes go, this one is pretty linear while still being hilarious.

I only know that the song is a cover because of the album it is on, Punk Goes Pop. It was apparently released in 2002, and17 pretty nifty tracks. Most of the songs covered are 1980s, 1990s and 2000s pop, so I'm not sure how they got away with it. The best covers are, not surprisingly, by bands that went on to make a name for themselves - “Everywhere” by Yellowcard, “I'm Real” by the Starting Line, “Send Me An Angel” by Thrice. I am a bit of a cover connoisseur, and from top to bottom, the album is one of the better cover albums floating out there.

- “Wutang Remix” by some unknown artist. Back in the days of Napster, file names and ID tags were... highly optional. I found this track by randomly typing in “wutang remix” back in the day, and true to the search, this is what popped out.

The rapping itself is pretty good, but it is only a “remix” in the sense that “Wutang Clan Ain't Nothin' To Fuck With” is looped under the rapping from time to time. Outside of the lyrics, there is no identifying feature of the song. Curiously, Eminem uses some of them in the final rap battle in Eight Mile, but I get the feeling that passage is a fairly common homage in rap music.

- “Band on the Run” by Paul McCartney and Wings. The other week, I was talking about how I'd rather be David Bowie than Paul McCartney, but in reflection, it is by the slimmest of margins. And, if I had to pick between McCartney and Lennon, I'm definitely going with McCartney.

I really don't know much of the history of the band, and I haven't listened to every Beatles album ever. But from my casual observation, it seems like McCartney was a lot more easygoing and more interested in making hit records, which is probably how I would act too if I was in the Beatles. It would be hard for me to not roll my eyes as John was talking about getting into weird spiritualism with his freaky-deaky girlfriend.

Also, McCartney comes off as a decent guy from his post-Beatles career. He was great on “The Chris Farley Show” sketch on Saturday Night Live, and Dana Carvey also tells a great story about hanging out with him and Lorne Michaels. Wings heavily featured Paul AND Linda McCartney, and given the history of other husband-wife musical projects, I think it has to be ranked as the absolute best.

- “Level” and “Steady As She Goes” by The Raconteurs. This is a band that I've always wanted to get a lot more into, but outside of these two tracks, I simply haven't heard most of Broken Boy Soldiers, or any of their follow-up album.

It is an odd but common problem. A lot of times, I love a song or two from a band so much that the rest of their work pales in comparison. It can even vary from single-to-single: I love “Level,” but when it pops on to my iTunes as it just did now, it reminds me that “Steady As She Goes” is a superior song on nearly every level, so I scroll down a few tracks and play it instead.

I think both songs are also helped by sporadic radio play, one of the rare instances where I don't think an indie band is effed out on WBRU. Once the Racounters and other bands like the Yeah Yeah Yeahs, Interpol and (two months from now) Ida Maria drop from the charts a bit, WBRU doesn't bother to recycle their tracks as much as they would with a popular, effed out band. (I'm looking in your general direction here, Red Hot Chili Peppers.)
Posted by Steve G. at 8/16/2009 07:00:00 PM