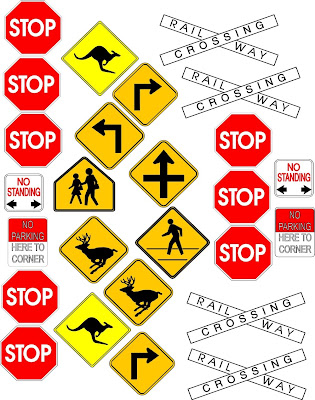 [Left] Please Rhode Island, put up ANY of these! I'd be thankful even if I saw the friggin' kangaroo signs.

If you're a visitor to Rhode Island, it is quite easy to get into the state, but you might never leave.

I'm not trying to make a reference to the (awful) "Hotel California" with that line, by the way. I'm referring to the complete lack of decent street signs throughout the state, but especially in Providence. I've lived in Rhode Island my entire life, and been to Providence about a dozen times, but I almost always get lost trying to make my way out of the city.

Getting into Providence isn't a problem, and places like the Providence Place Mall, the convention center, the Dunkin' Donuts Center and the arts district are all marked off pretty well with signs on Route 95 and Route 6 and Route 195. Getting out is a hellacious odyssey that requires several Sherpas and inner-city voodoo doctors.

For example, today I had an assignment in the city at 10 a.m. I made it there from my house in about 45 minutes, which was all gravy. The speech got over about 11 a.m. I left then, and because I couldn't find the sign guiding me back to Route 6 or Route 95, I had to drive around to find Route 95 for about 20 minutes. By dumb luck, I stumbled on Service Road 6 (actual name), and knew that I could (eventually) follow it to 95. And, by the way, because of construction I had to make about eight turns before I did get to the highway.

This is an especially big problem with the advent of things like car GPS systems and Google Maps. Since they give directions via street names, and Rhode Island leads the nation in missing street signs, this can be quite a problem. Google also still calls things with common names - Route 91 - by its "official" name - Church Street - that nobody actually uses.