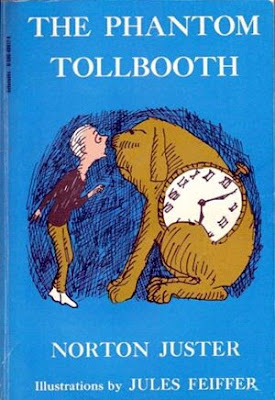 [Left] My favorite book of all-time, The Phantom Tollbooth, and by the way, you can bet your sweet ass that I'm upset it didn't make this list. What gives, BBC??? No wonder you're a broadcasting company.

So, my friend Danielle tagged me in this survey the other day on Facebook, and because I couldn't answer it right away, I thought I'd do it here on the blog. I added comments where appropriate. Since Saturdays are normally slow days for hits anyway, I didn't think anyone would mind. Here we go!

The BBC believes most people will have only read 6 of the 100 books here. How do your reading habits stack up? Instructions: Copy this into your NOTES. Look at the list and put an 'x' after those you have read.

Total: 5. The Lord of the Rings is really, really dry, and I wish people would just admit that the movies are better, as opposed to insisting that others read 1,500 pages of sluggish material about Elven words. I find Jane Eyre and 1984 just as sluggish and bad, but Mockingbird and Great Expectations are great and good respectively.

Total so far: 8. I read Tess, but it was for some research paper in high school, and barely remember doing it. Catch 22 took me three attempts for no discernible reason; I loved it. And The Hobbit is Tolkien's actual great work, since it is accessible by just about any person or age grouping.

Total so far: 12. I share Hunter Thompson's opinion that The Great Gatsby is the best-written novel ever. It doesn't mean that it is my favorite book, but in terms of tone and skill of writing, I think it is what I grade out as the best. The Hitchhiker's Guide to the Galaxy is the quintessential "wacky" book that everyone should read. Alice in Wonderland is overhyped a little; the movie is better. And Grapes of Wrath is important, but a bit dry and depressing to re-read.

Total so far: 14. The CS Lewis books are a lot more accessible than Lord of the Rings, too. Oddly, I didn't have any sort of religious backing as a kid, so all of the symbolism and ideology inserted by Lewis went over my head. Also oddly, I haven't seen any of the movies.

Total so far: 17. I had to read 1984 when I was in high school, but now, they make the kids read Animal Farm. I wish I had had that assigned to me instead, because I think it's easier to read and its political symbolism is better. I hated Lord of the Flies in ninth grade, but I had to re-read it in college, at which point I found it a lot better. I read Far From The Madding Crowd at the same time I did Tess, and I can't say I remember it any better. Given its title, I imagine that is the one about the harsh, silly judgments of society.

Total so far: 18. Brave New World was yet another book I had to read for school. I think between high school and college, I had to read it four times; ugh. The first half of the book is great, with the explanation of how the society worked, but the last couple chapters I just wasn't into at all.

Total so far: 20. Yeah, I've read Bridget Jones's Diary. So what, big whoop, you wanna fight about it? I thought it was a decent, breezy book, but I definitely wouldn't put it on the same scale as the others on this list. Speaking of, Count of Monte Cristo is a great, compelling story.

Total so far: 21. In ninth grade, I thought the concept of the book sounded neat, since it's about Hell and what not. Actually reading it was Hell. har har!

Total so far: 23. Charlotte's Web is a classic, and I think I read it for class in fourth grade; it was the first chapter book we did. I've read various Sherlock Holmes tales, inspired by my childhood love of Encyclopedia Brown, and I liked them all.

Total: 27. Le Petit Prince! Our final project in high school French V was reading that book and translating it to English, I believe. It was a sweet little story. Likewise, although Les Miserables has a completely different tone, I did check out an English version after we covered it extensively in French class. I've head Hamlet a half dozen times for various classes, but I still enjoy it. And Charlie and the Chocolate Factory, while a solid book, is better as a movie with Gene Wilder. The book's sequel is one of the first novels I actually owned, so it has a special place in my heart, even if I did find the vermicious knids scary at the time.

I think this list does underrate how much I read - My primary interest is non-fiction, so a lot of great non-fiction books, like All The President's Men, Moneyball and Outliers aren't even eligible. Boooo again, BBC!
Posted by Steve G. at 8/08/2009 04:30:00 PM