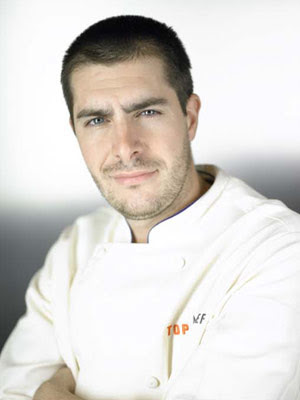 Top Chef starts its sixth season tonight, this year in Vegas, and I'm naturally thrilled about it. I've been following the show since its initial season in March 2006, which saw the utterly awesome Harold cook his way past Tiffany the Snake and super amazingly over-the-top gay David and super-snarky before he reformed Steven.

While that season remains the pinnacle of the Top Chef viewing experience, I still find it one of the most enjoyable hours of my television week. Even seasons without interesting scenes still features mouth-watering meals, and doing my own judging via my vision is strangely enticing. It's also one of those shows that appeal equally to both sexes, meaning I could always watch it with my past girlfriends. So, it has that going for it, which is nice.

Not surprisingly, my two favorite meals have been steak / beef dishes, by Harold and Casey. I think Casey was robbed the year she competed, and of all the seasons, Ilan has definitely been the weakest overall winner. Every week, he would have some weird Spanish take on some dish. While they weren't ever awesome, they didn't ever suck, and as a result he kind of coasted to a win.

I think the seasons after that one have done a better job of rewarding excellence and risk-taking as opposed to just base competence. That being said, one way the show would definitely be improved is by keeping, say, the last three weeks in mind while at the judges' table. It would cut down on the Andreas and Michaels who barely squeak by week-by-week, and keep in the actually great cooks like Richard Blais, Stefan and Fabio. (By the way, Fabio is so ridiculous that he even charms me a little bit.)

Top Chef Masters is a nice little appetizer, or an amuse bouche, as they would say on the show, but it doesn't really substitute for the real thing. It's not surprising to me that Hubert Keller was doing so well, since he definitely seems like he knows what he's doing when he judges the contestants. And it doesn't surprise me that the nerdy-looking dude that won with Richard Blais did pretty well, because he was also a good job. (Sorry about the lack of analysis; I missed the last two episodes, unfortunately.)

I still maintain that they need to bring Katie Lee (no longer, woohoo!) Joel back to replace Padma. First off, Padma is only hotter if you prefer the female-female impersonator (Pamela Anderson) look, because she is about 80 feet tall with ginormous, cartoon breasts. The Hardee's commercial she did is just gross. Katie Lee Joel is the foxy girl-next-door. I don't really mind that her personality is a bit wooden, because it gives more opportunity for Tom and Gail Simmons (also kind of foxy) and the guest judges to shine. To use an oblivious cliche, having Padma in the mix is an example of having too many cooks in the kitchen.
Posted by Steve G. at 8/19/2009 07:00:00 PM