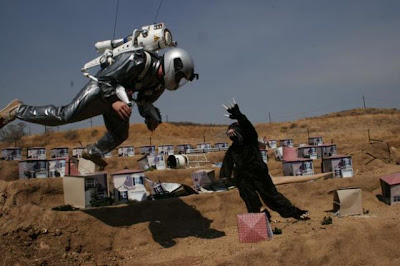 The best scene ever from Arrested Development.
So last night was my buddy Bob's wedding; you might remember him from previous blog tag teams here and here. (As an aside, his wonderful wife, Kristin, did write me something, a la how the Sports Gal writes a sidebar for his column. It'll be posted tomorrow morning.)

All-in-all, it was a great time. It was on the deck of Amalfi, a nice restaurant that has a deck overlooking Narragansett Beach and the Atlantic Ocean. After a 30-minute ceremony, there was a full night of open bar, free appetizers and a dinner, all three of which are great to me. I checked out shortly after the dancing started, because like almost every guy ever, that's not really my scene.

I suppose the only disheartening thing was that there weren't a ton of single people my age. Although I'm not having a quarter-life crisis or anything, I have noticed that there is a bit of a drop in the dating pool as I get older, and meanwhile, I feel like I'm in a state of arrested development.

For example, if I met someone tomorrow, and everything went great, and we never, ever had issues, we might get married in two years. I'd be 27, so kids would probably happen when I was 28, with me hitting my 40s as they hit their teens. That has always been my kind of ideal when I was growing up and imagining my future self.

Real-life kind of got in the way of all of that, regardless of what I acknowledge as the cause - age differences and life differences and my stupidity in past relationships, my layoff a year ago or my decision to pursue journalism as opposed to million dollar banking as a profession. While I'm generally happy right now and in a good situation (finally) when it comes to working, I still got a melancholy feeling watching other people dance and what not last night. It felt even odder when a pair of Bob's friends told me they have been to SEVEN weddings this summer!

Anyway, let me acknowledge the final part of this entry's title - Arrested Development. That's what I watched when I got home, and that did bring a smile to my face, which was awesome. For those of you curious about what episode I watched, it was the one where George Michael thinks he got a jetpack from his dad, and the culminating scene in the episode has him wrestling with Tobias, dressed as a mole, as they destroy a mini-village setup by Gob and Buster as a demo for Japanese businessmen. (That was a mouthful! p.s. That's something Tobias would say.)
Posted by Steve G. at 8/22/2009 07:00:00 PM