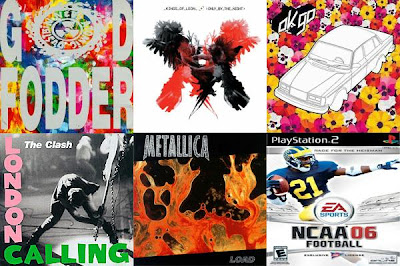 This week's artists.
- “Use Somebody” by Kings of Leon. I actually don't care much for Kings of Leon's biggest hit, “Sex on Fire,” because it makes little sense to me and isn't that interesting, musically, to me. It has these weird, muddy vocals that I'm not into.

However, “Use Somebody” is great for the opposite reason – The lyrics on it are strong, and the guy's voice is quite lovely to listen to. I realize that it is overplayed a bit too much, but this will just make it better in a couple years, after it has gotten a bit of rest, a la Primitive Radio Gods.

- “King Nothing” by Metallica. I'm just playing through Guitar Hero: Metallica now, which has made me realize that they've sneakily come up with about a dozen really good songs. Back when I was growing up, I always associated them more with “Enter Sandman” and a bunch of filler, but as I've matured, that song has gotten really F'ed out, while the others have aged better.

Case in point: This song. It was like the 40th single off of Load (note: actually the eighth, an obscene amount for a single album), and at the time, I didn't think it was anything special. But after being forced to play it or Judas Priest to advance in Guitar Hero, it has definitely grown on me. The same with kind-of-repetitive (at least to me) Metallica songs like “Master of Puppets” and “The Unforgiven.”

- “You're So Damn Hot” by OK Go. OK Go hasn't really shown much range at all, but that's why I like them so much. All they do is make incredible hit modern alternative rock songs. I suppose at some point, they'll try some more ballad-y or artistically credible music, but until then, I revel in songs like “Here We Go Again” and “Get Over It.” Both of them, and “You're So Damn Hot,” are somewhat simplistic, but they're all solid songs, first and foremost.

Although Interpol has a much different sound, I feel the same way about them. They have a particular niche – eerie, atmospheric alternative – and they are content to repeatedly butter the same bread. (That analogy is a little sloppy, but you get the picture.) Ditto with the hard-driving music of Queens of the Stone Age. I'm almost willing to put the White Stripes in this grouping, but they do veer a bit more to the “fulfilling self-artistic side” than just making music people like, at least in my opinion.

- “Train In Vain (Stand By Me)” by the Clash. It's the Clash, so it's obvious that they're great; you don't need me to tell you that. They missed my list the other day because, while I can appreciate their musicianship, I'm not a huge connoisseur of Clash songs, and they didn't have a slew of radio hits. The same thing goes for the Ramones (who are way overrated in my book).

I do think this song is incredible though, and it deserves kudos for being on the best video game soundtrack in my opinion: NCAA Football 2006.

Oh, you thought I'd go with something more conventional, like Secret of Mana or another Square game? This will no doubt annoy some of the video game players reading this, but I vastly prefer commercial music to just about anything in video games. While Secret of Mana does have a great soundtrack, when I replay it, more often than not I mute the game's sound and just play my iTunes.

There are two exceptions to this. One, games that emulate modern music with their tracks. The best examples of this are the PS2 Persona games, which both have great soundtracks, and the DS RPG The World Ends With You. Second, I like games that just say, “Eff it,” and include commercial music. Most EA Sports games take this tact, which I enjoy.

NCAA Football 2006 is the best of the bunch, as it features the aforementioned Clash song, “Hyper Enough” by Superchunk, “Kill Your Television” by Ned's Atomic Dustbin, "Me Myself and I" by De La Soul, "Debaser" by the Pixies and “Teenage FBI” by Guided By Voices. Haven't heard of any of them? Well, just buy NCAA Football 2006, because it has all of them and costs $5 on eBay. Problem solved!
Posted by Steve G. at 8/02/2009 09:00:00 AM