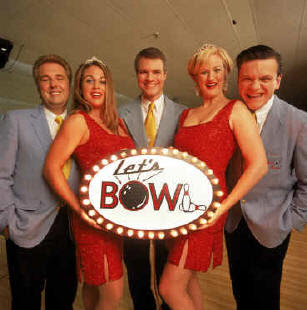 [Right] An image from Let's Bowl, the best dispute-settling bowling game ever broadcast on cable television.

Once upon a time, I remember when Comedy Central didn't suck. To be fair, they still do have some great shows. South Park, The Daily Show and The Colbert Report are all still awesome, and I am excited to check out more of Michael and Michael Have Issues, and Tosh.0.

But the rest of their shows and what they choose to show is severely lacking in originality or taste. For example, The Sarah Silverman Show varies wildly in quality; maybe I'm just tiring of her “I say offensive things!” schtick. There is still too much blue-collar comedy crap and iffy stand-up in general. I'll go months without seeing Mitch Hedburg or Zach Galifankis or Todd Barry.

However, there are two especially egregious things Comedy Central has indulged in lately – shitty movie selection and an inability to get creative with programming.

Speaking on the first point, I can do without Dane Cook's Employee of the Month being shown on weeknights. Employee of the Month is the type of dreck you convince yourself into renting from the local video store when you and your girlfriend want something on the background while you make out. Dane Cook is to college frat guys what Larry the Cable Guy is to rednecks. Whatever wit their acts originally possessed has been pimped out to relentless commercialism.

If you are Comedy Central, how are you not showing a bunch of classic, great comedies on loop? I'm not even talking about stuff like Duck Soup with Groucho Marx or Dr. Strangelove, which would be artsy and daring selections. I mean simple stuff like letting Caddyshack, Ghostbusters and Stripes slip to AMC, not showing This Is Spinal Tap and Best In Show and Waiting for Guffman, and letting VH1 and MTV show a bastardized version of Wayne's World. I just rattled off seven awesome comedies, and I can't remember seeing any of them on Comedy Central, and all of them are old enough that the viewing rights probably aren't that expensive to procure.

Lastly, I wish Comedy Central would take some more risks with what they do chose in terms of original programming. They have tried the talk show format about 50 million times, and unless it is The Daily Show or run by a former Daily Show staffer, it inevitably fails. If you blinked, you might have missed the shows hosted by David Alan Grier, D.L. Hughley, Adam Carolla, Lewis Black and Colin Quinn.

Back in the day, Comedy Central would at least attempt more original programming. An example would be Let's Bowl, a show that seemingly only I loved. It featured bowling matches between amateurs to settle petty disputes with snappy and snarky MXC-style commentary. It predated Dodgeball and MXC and Ninja Warrior, so I feel like it was a little ahead of its time.

Once upon a time, Comedy Central took a chance on a show that just had two robots and a human lost up in space commenting on shitty movies – It was called Mystery Science Theatre 3000. And another time, they greenlit a show with very mature elementary school students that cussed a lot – South Park. And another time, they let a guy who had a very popular cult movie about weed have his own show with almost no oversight – Chappelle's Show. These risks seemed to pay off quite a bit.
Posted by Steve G. at 8/01/2009 09:00:00 AM