At The Commercials: Ron Popeil owns my soul 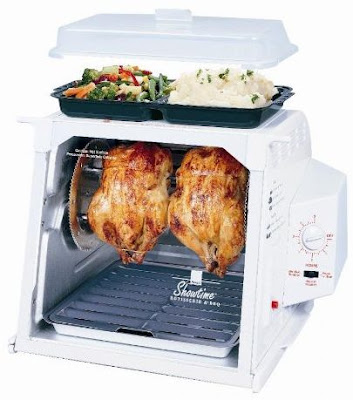 There is a persistent infomercial on Saturday and Sunday mornings that I know everyone has seen, and that is steadily taking over all processes of my rational thought. In fact, it was so persistent and I talked about it so much that my parents were talked into a purchase of said product well before I was, since I don't own it.

The product? Why, it would be Ron Popeil's Showtime rotisserie grill. I am almost positive that you have seen it advertised consistently as well, since it pops up constantly on Food Network and network television in the aforementioned time slots. I can never change the channel as Ron just starts cooking up a huge leg of lamb, rump roasts and whole turkeys in the rotisserie grill, and my favorite part is when he used the flavor injector to shoot whole cloves of garlic, olives and pimento into some lamb.

For what it's worth, the product does work as advertised. My parents have prepared many a roast in it, and having tasted the ensuing roast, they have been tender and juicy. Clean up also seems pretty easy, as it just requires sliding the rotisserie unit out of the grill, washing it by hand or throwing it in the dishwasher, and wiping down the rest of the grill. I will say though that it is not as good for individual meals as the infomercial implies. Because of its size, it has always seemed impractical to use it to just cook a couple burgers or a single steak.

The other Ron Popeil infomercial I see constantly has him and a stocky old man, who reminds me of a nicer Ed Asner, hawking knives. This infomercial is all wickedly effective, as it shows them both hacking through huge cuts of meat with ease. The flavor injector is also part of this deal, which is nice. However, I don't know of anyone who has actually bought the knives, so I can't recommend it as highly as the grill, which I know is a quality product.
Posted by Steve G. at 3/02/2010 07:00:00 PM