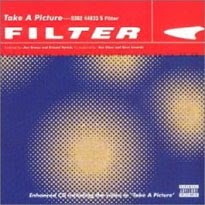 Just a quickie for tonight, since I had to cover something this morning and most likely will be busy for a couple hours tonight at a town council meeting...

Over time, my tastes in Filter songs has evolved. Back in the day, my favorite song was "Hey Man Nice Shot," which is angry and growling and very 1990s grunge / alternative. One of my oldest memories is watching that horrible Tales From The Crypt movie Demon Knight when I was at a sleepover with friends in sixth or seventh grade. While we loved the movie because there was a naked lady in it, the opening song was also "Hey Man Nice Shot."

In college though, my favorite song was "Jurassitol", which if you can imagine is an even heavier and more driving than "Hey Man Nice Shot." I would listen to it a lot on the way to playing basketball, since there is an extended portion just with the guy screaming. It was good for getting the blood pumping, you know, along with other favorites like Buckcherry, Yellowcard (played very loud), Stabbing Westward, and Incubus covering Big Pun.

Now though, my favorite Filter song is "Take A Picture" and it doesn't really sound like Filter at all. Similar to Green Day going a bit softer for "Time Of Our Life" (I'm not calling it by its actual name; eff you Green Day), "Take A Picture" is uncharacteristically soft for Filter. Sure, he screams a bit at the end, but it works well in the context of the song.
Posted by Steve G. at 3/16/2010 07:00:00 PM